|
By Matt Hayes
Share
When a novel strain of a wheat pathogen first emerged in East Africa in 1998, Norman Borlaug knew the world faced a dire threat to food security.

The virulent race of stem rust that became known as Ug99 was deadly to nearly all wheat varieties and threatened to cause epidemic losses in wheat fields around the globe. To combat the disease, the Nobel Peace Prize-winner Borlaug and a team of committed scientists at Cornell, CIMMYT, ICARDA and other organizations sounded the global alarm in 2005. Those pioneers launched the Borlaug Global Rust Initiative (BGRI) to protect the global wheat supply against the spread of Ug99 and other challenges.

Ronnie Coffman, the Andrew H. and James S. Tisch Distinguished University Professor, director of International Programs, international professor in the Department of Global Development and vice-chair of the BGRI, described those early efforts and long-running scientific work to combat wheat disease in a keynote speech June 25 from the BGRI. The virtual “Take It to the Farmer” event featured videos and discussion with farmers and experts from around the wheat-growing world.

According to Coffman, the world averted disaster thanks to the coordinated global effort led by Cornell’s BGRI with more than $100 million in funding for the Durable Rust Resistance in Wheat (DRRW) and Delivering Genetic Gain in Wheat (DGGW) projects from the Bill & Melinda Gates Foundation and UK aid from the British people. 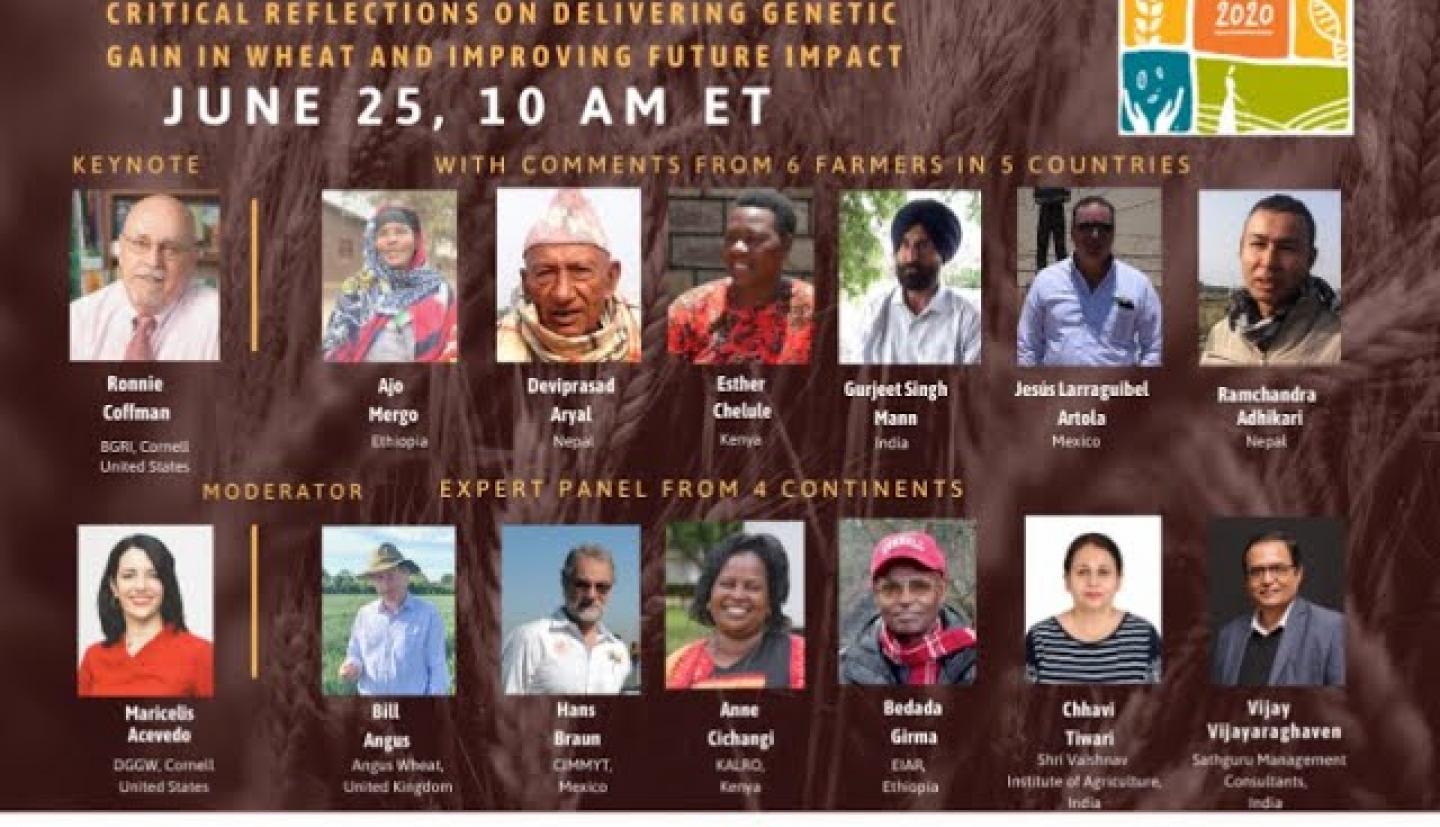 Play BGRI Take It to the Farmer

The BGRI and the projects it managed was essential to protecting one of the world’s most important crops, according to Coffman, who worked with Borlaug in the wheat fields in Mexico in 1970, as a Cornell doctoral student in plant breeding.

Coffman noted crucial outcomes from the DRRW and DGGW projects, which include vast increases in land area planted to rust-resistant varieties, global expansion of a wheat pathogen surveillance network,  more young wheat scientists in countries around the world — especially women — trained to be wheat breeders, pathologists, gender experts and project leaders, and the establishment of a global wheat community dedicated to the improvement of one of the world’s most important crops.

“For 12 years, through the DRRW and the DGGW projects, the BGRI has focused on delivering rust-resistant varieties of wheat to the farmers around the world who depend on agriculture and wheat production for their livelihoods,” said Coffman.

“We have been especially dedicated to smallholder farmers in wheat-producing countries in Africa and Asia. Men and women who do not always have the access to new technologies — like improved seed — that they need.”

During the past 12 years, BGRI scientists have released more than 270 new varieties of wheat with greater resistance to diseases and environmental stresses such as climate change, working with national programs in 11 at-risk countries.

“These varieties have contributed enormously to improving the livelihoods of the farmers who adopted them,” Coffman said.

Maricelis Acevedo, associate director for science for DGGW and senior research associate in the Department of Global Development, said that the successes were only possible by building a network of global researchers working in tandem with farmers on a common goal to secure the world’s wheat.

“Science and agriculture are forever linked in our enduring quest to feed the world,” Acevedo said.

“The BGRI is committed to making sure scientific innovations help the world’s farmers prosper.”

One element of those efforts is robust surveillance of wheat pathogens. To track the spread of rust and other diseases, the BGRI expanded the international monitoring network from two countries in 2007 to 43 today. By utilizing precise location tagging equipment and mobile devices, “our partners now operate the world’s largest international crop disease monitoring system in the world,” said Coffman.

The projects also helped establish facilities needed to monitor and respond to diseases. Investments in greenhouses, irrigation systems, laboratories, field equipment and communications technology gave global partners the tools needed to collaborate with other wheat scientists around the world to breed more rust resistant wheat, and help farmers stay ahead of epidemics caused by evolving races of rust. At nursery facilities built in Ethiopia and Kenya, scientists are able to test elite wheat varieties from national wheat breeding programs around the world against various strains of rust.

Long-term sustainability and durability depend on knowledgeable and dedicated scientists, according to Coffman. Since 2008, more than 1000 wheat scientists from countries around the world have been trained with funding from the projects, Coffman said.

“As we move forward, to 2030 and beyond, we must rededicate ourselves to understanding farmers’ needs because they are the ultimate beneficiaries of our work,” he said.

Wild blue wonder: X-ray beam explores food color protein
In food products, the natural blues tend to be moody. A fun food colorant with a scientific name – phycocyanin – provides a vivid blue pigment that food companies crave, but it can be unstable when placed in soft drinks and sport beverages, and then lose its hues under fluorescent light on grocery shelves.

Fish tagged 26 years ago recaptured during Hudson sturgeon count
Researchers conducting a population estimate of shortnose sturgeon in the Hudson River caught one on Nov. 19 that had been tagged 26 years ago, during the last such count.
END_OF_DOCUMENT_TOKEN_TO_BE_REPLACED