We don’t have to choose between people and the planet

|
By Krisy Gashler
Share
For years Kwesi Joseph has been experimenting with adding nutrients to improve his garden’s soil health. First it was peanut shells to increase carbon, then ground-up eggshells to boost calcium. As a former earth science teacher, he wondered whether mixing pulverized rock into his soil could add the broad spectrum of micronutrients he needed to help his plants thrive.

“I thought, ‘Soil is really just weathered rock. If I just take care of the soil by providing an ideal environment for the life in the soil, then the plants will know what to do,’” Joseph said.

Driven by a desire to provide food security, independence and improved nutrition, Joseph, now an urban gardens specialist with Cornell Cooperative Extension, is working with Cornell biogeochemists to incorporate rock dust in soils, a technique that captures carbon while improving soil health and crop yields.

The rock dust project is one of several “smart carbon capture” studies being led by scientists in the College of Agriculture and Life Sciences that not only address the existential threat of a changing climate, but also support farmers, human nutrition, wildlife and more. An ecologist is studying how to design ponds to maximize their carbon storage potential, a strategy that will also support drought resilience for farmers. And a social scientist is working to understand the needs and values of New York landowners on their willingness to reforest shrubland, which would sequester carbon while creating habitat for wildlife and a potential economic resource for landowners.

This is the first in a series of articles looking at Cornell CALS’ pursuit of transdisciplinary, comprehensive solutions to our planet’s most complex and interconnected problems.

Learn more about the CALS Roadmap to 2050.

Joseph is partnering with Ben Houlton, the Ronald P. Lynch Dean of the College of Agriculture and Life Sciences and professor of ecology and evolutionary biology and of global development; Garrett Boudinot, a research associate in the Department of Ecology and Evolutionary Biology; and the Hands and Heart Community Garden in Brooklyn, New York, to test crop yields, crop nutrient density and carbon storage in garden beds treated with rock dust.

“The only way to address the climate crisis is to develop holistic solutions that also create co-benefits, especially for industry, landowners and farmers who are critical allies in this fight,” said Houlton. “Farmers specifically have been using rock dust as a fertilizer for centuries because rocks have micronutrients that are hard to come by otherwise; they improve soil chemistry and help retain nutrients. And this drives the process that pulls CO2 out of the atmosphere.”

Basalt, the most common type of rock on Earth, contains high concentrations of calcium and magnesium, which chemically react with atmospheric CO2 and bind it in solid rock to form calcite, dolomite and magnesite. The natural process of rain falling on mountains and other rocks removes approximately 1 gigaton of carbon from the atmosphere each year. Adding pulverized basalt to farm fields could remove up to 4 tons of CO2 per acre, Houlton said, and if the practice were adopted across all of Earth’s agricultural lands, rock dust could sequester 4 to 10 additional gigatons of carbon dioxide annually. For comparison, the United States released 4.87 gigatons of CO2 in 2021.

And fortuitously, rock dust is readily available: Mining companies often dig through basalt to get to the materials they seek, said Houlton. For example, SGI, the metabasalt mining company that supplied the rock dust for the Brooklyn trial, has an abundance of nutrient-dense rock dust from its manufacturing process that is suitable for CO2 capture and which the company would otherwise have to store or transport offsite.

“Industry partnerships such as this have multiple co-benefits and are critical to being able to quickly scale solutions,” he said. “There are millions of tons of existing pulverized rock all over the world that are perfect chemistry for smart carbon capture.”

For the urban garden project that Houlton is conducting with Joseph and Boudinot, the application of rock dust to raised garden beds holds a lot of promise, allowing them to architect a soil environment from scratch, incorporating rock dust at a higher rate and increased depth.

“All of these factors could potentially accelerate the amount of carbon dioxide that can be removed from the atmosphere,” said Boudinot, who also is a Cornell Atkinson Center for Sustainability faculty fellow. “There’s a lot of potential for this approach to demonstrate a series of wins for all involved – growers, consumers, industry and the planet.”

For Joseph, improving soils while capturing carbon would be a critical step in helping people around the world. He was still a child when he first started thinking about food and agriculture as a form of justice. His native Guyana had just succeeded in gaining independence from Britain, and the country’s new leaders had emphasized the importance of food security as a form of national security.

“I remember having a garden in school and being taught that independence also means being able to feed your own people,” Joseph said. “Food justice is not just about growing food and making money: It’s about righting wrongs.” 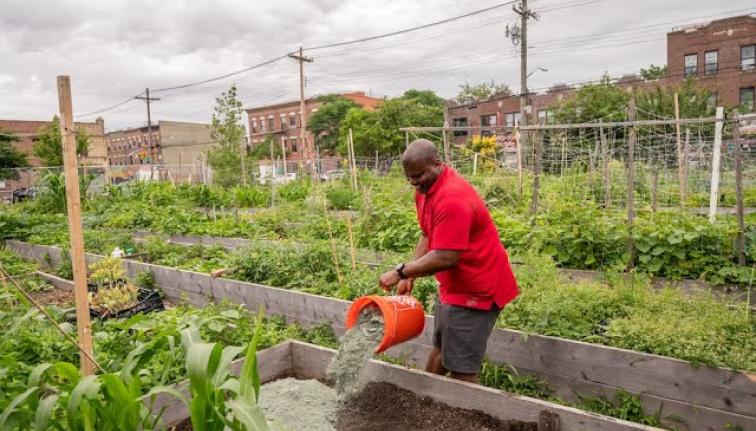 Human-constructed ponds provide myriad benefits, including drought resilience for farmers, fire safety in rural areas without municipal water, and habitat for fish, reptiles and amphibians that feast on pests that damage crops and harm human health.

Ponds, when constructed well, may also be critical in the fight against climate change. Meredith Holgerson, assistant professor in the Department of Ecology and Evolutionary Biology, is studying the variables that would help ponds store maximal carbon while emitting minimal methane, a potent greenhouse gas.

“Very few studies have looked at greenhouse gas emissions and carbon burial in the same waterbodies,” Holgerson said. “It’s usually different researchers who study emissions vs. storage; but, intuitively, they are very connected, and if we want to understand carbon budgeting on a local or global scale, we need to look at these issues together.”

Holgerson is overseeing research on a host of factors that could influence ponds’ ability to capture and store carbon while minimizing greenhouse gas emissions. These include pond size and depth; presence or absence of vegetation around ponds; and how pond oxygen concentrations affect the production of carbon dioxide vs. methane – both are climate-warming gases, but methane has a far greater short-term warming potential than CO2.

For example, Holgerson’s lab is studying the impact that plant, fish and phytoplankton communities have on microbes, the smallest and mightiest players in this climate drama: In oxygen-rich environments, bacteria that create CO2 thrive; in low-oxygen environments, microorganisms called archaea dominate and produce more-harmful methane. Fish communities can alter phytoplankton, nutrient recycling, oxygen levels and pond temperature, all of which could influence whether more CO2 or more methane is produced.

“Ponds provide all sorts of ecosystem and human benefits, and there are hundreds of millions of them globally,” Holgerson said. “If we can figure out how to make new ponds or redesign existing ponds to store more carbon and release very little methane, it could make a big difference for the global carbon budget.”

New York state has 1.6 million acres of abandoned farmland potentially available for reforestation or hosting renewable energy infrastructure. Reforestation with native species could provide benefits to landowners, wildlife and the climate, because mature forest sequesters far more carbon than brushland or early successional forest. Many of those acres are owned by private landowners, so understanding their motivations and barriers to better support their goals is critical to combating climate change.

Rich Stedman, professor and chair of the Department of Natural Resources and the Environment, is leading a project that recently surveyed New York landowners to learn more about their desires, values and intentions for their land. They also asked about beliefs around climate change and what kinds of incentives or barriers might encourage or dissuade their participation in a variety of reforestation practices.

“You can know exactly how many thousands of acres are potentially available,” Stedman said, “but none of that will mean much if landowners don’t want to engage with projects like reforestation or renewable energy.”

Stedman and his colleagues surveyed 3,500 landowners in 15 counties in upstate New York.

Among respondents, most of whom were men who identified as politically conservative, 64.8% agreed with the statement “Climate change is a serious problem that requires immediate action.” As for converting their land to other purposes, respondents were most interested in improving wildlife habitat (83.8%), followed by growing more mature forest for carbon sequestration (64%). Fewer landowners were interested in hosting solar (39.6%) or wind (35.5%) infrastructure. When asked about what factors might discourage them from converting any of their land to mature forests, the biggest barriers were lack of labor to do the work (87.6%) and potential costs (85%).

The survey was funded by the New York State Department of Agriculture and Markets, and the researchers plan to write policy recommendations that consider the relative importance of barriers and incentives to landowner participation in reforestation, with guidance on what kinds of incentives are likely to appeal to what kinds of landowners.

“Moving from theory to practice requires a much more informed and realistic sense of how much land is available and what kinds of incentives or education might encourage landowners to consider climate-supportive changes,” Stedman said.

Climate change is already disrupting agriculture and worsening global hunger: Cornell-led research found that 21% of cereal grain productivity has been lost to climate change, and these losses could double by 2050.

“Given the clear and present danger of continued climate change impacts, supply chain shocks, inflation and international conflicts, investments in ag research are needed to protect economies, human health and welfare, and food and national security,” said Houlton, who testified to the U.S. Congress on these issues in June. “But we can still turn the tide. With bold, forward-thinking investments, I envision a future where agriculture leads in climate solutions and uplifts rural communities, while producing even better food with fewer environmental impacts.”

As the world faces complex, interconnected, systemic challenges, Cornell CALS is building collaborative solutions to effect positive change in communities from local to global scales. Read more about our vision, and learn how you can support our efforts to hire preeminent teachers, explore transdisciplinary research, and engage with communities across the state, throughout the country and around the world.

Advocating for farmers and the climate

“The idea is to support strategies that reduce greenhouse gas emissions while also helping farmers. For example, if a farmer decides to practice no-till soil management, they can spend less on fuel and decrease carbon dioxide emissions, as compared to conventional tillage.”

Adapting to climate change, reducing carbon emissions and participating in carbon sequestration efforts is a new frontier for many farmers across the state. To help them navigate new technology and translate the latest climate research into meaningful action, Cornell Cooperative Extension added two new specialists to the Harvest New York team.

In the 1990s, Indonesia’s effort to transform the country’s vast peat swap region into productive agricultural land ultimately resulted in one of the country’s worst environmental disasters. How?