Sled dogs lead the way in quest to slow aging

|
By Krishna Ramanujan
Share
Dashing through the snow at 25 miles an hour, Heather Huson ’97 got her first thrill as a musher at age 7. From then on, she was hooked on dog sledding, and raced competitively for almost 30 years throughout North America.

By the end of her racing days, she had competed twice in sled dog racing’s equivalent to the Olympics – the International Federation of Sleddog Sports World Championships. And she ended her racing career with a bang, winning an extremely competitive six-dog class race at the 2004 Tok Race of Champions in Tok, Alaska.

Now an assistant professor of animal science, Huson is co-leader of a $4.2 million project studying close to 100 Alaskan sled dogs between the ages of 8 and 13, former athletes past their glory days. The study, which began in 2018, is a quest for one of the holy grails of medicine: how to slow aging.

“This project allows me to work with sled dogs again, but now I’m studying their aging and health,” said Huson, a molecular geneticist in the College of Agriculture and Life Sciences.

Huson and co-leader Dr. John Loftus, assistant professor of small animal medicine in the College of Veterinary Medicine, are trying to determine whether a drug that inhibits an enzyme called reverse transcriptase can mitigate aging and extend life in older dogs. Private donations fund the project through the Vaika Foundation, a nonprofit group of scientists and veterinarians on a mission to extend the health and life span of domestic animals.

The project will serve as a proof of principle for whether reverse transcriptase inhibitors could be an elixir. If confirmed, new finely tuned drugs could be developed for both dogs and humans.

“While we love dogs, and we care about extending the life span of dogs for its own right, this is also a really good model for people, hopefully, in the future,” Loftus said. 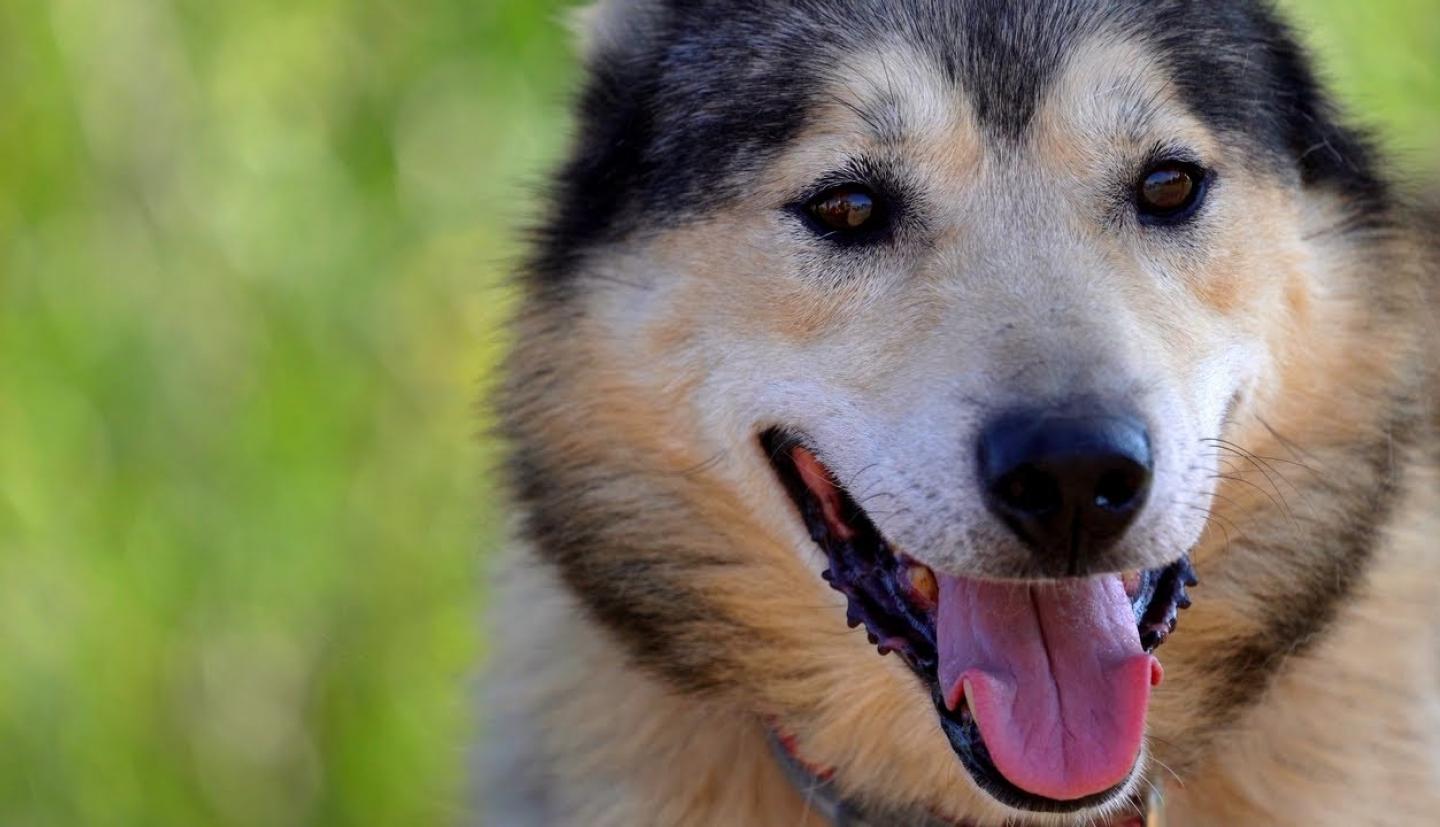 “The next step was to go to a model organism that’s more closely related to humans in similar environments, and more similar to the types of diseases that people get,” Huson said.

In mammals, viruses that infected distant ancestors left behind some of their DNA, which are called genetic elements.

In turn, reverse transcriptase plays a role in duplicating more of these genetic elements, which become randomly inserted in the genome and can lead to mutations and cancer.

And since these elements act like viruses in cells, they also trigger an immune response, which creates inflammation.

The federally approved drug being tested in the sled dog project is commonly prescribed to people for viral infections.

“Our approach is going to be to give the dogs a reverse transcriptase inhibitor to turn the transcriptase off,” Loftus said, “and hopefully reduce inflammation, reduce the incidence of cancer and other diseases related to mutations and DNA damage, and ideally increase life span.”

Dogs offer many advantages over mice as research subjects. They share with humans similar lifestyles and aging-related diseases like cancer and cognitive dysfunction, and serve as a model for studying Alzheimer’s disease.

Originally, the researchers proposed to study pet dogs. But maintaining a uniform diet for all participants and trusting owners to administer the drug consistently proved too unreliable.

“We had the idea instead to create a colony of dogs we had control over,” Huson said. They realized athletic dogs were housed in groups, in kennels, and as they age, owners kept their best dogs and often sold the rest to hobbyists or as pets.

“So that gave us an avenue for how we could get these dogs,” Huson said.

For her doctorate, Huson studied the genetics and selective breeding in Alaskan sled dogs at the University of Alaska, Fairbanks. She discovered that sled dogs are a genetically distinct breed. They have undergone intense selection for such traits as athleticism, but at the same time are subject to an open breeding scheme, with a diverse gene pool that makes for fewer genetic issues and diseases than pure breeds.

“Yet they create a unique population that is still homogenous that we can study and say, this response to the drug is potentially related to the drug and not because it’s a poodle versus a beagle,” Huson said.

In late May 2018, Huson and Loftus began acquiring dogs, which they kenneled at the Baker Institute for Animal Research at Cornell. Huson traveled twice to Alaska, and she and others, including students, picked up dogs from Canada, Michigan, Minnesota, Oregon, Washington and other states.

Locating dogs and bringing them to the Baker Institute required countless cross-country trips on planes and by vehicle. By September 2018, they had 102 dogs for the study. In March 2019, the researchers collected the first baseline data.

To test the drug’s effectiveness, Huson and Loftus have been quantifying aging in the dogs every six months through three avenues – immune function, behavior and physical condition. All the tests are noninvasive or minimally invasive.

They are testing two types of immune responses: adaptive responses that react quickly to infections; and innate responses where the immune system recognizes and delivers specific antibodies to fight a pathogen that previously entered the body. They are also checking blood for increases in markers for inflammation.

Four cognitive dysfunction behavioral tests involve an empty behavioral testing room with a video camera to record lone dogs as they encounter such things as a stranger sitting still in a chair, a familiar or novel toy, or a mirror.

For physical tests, dogs are fitted with a racing harness and are trained to run on a treadmill with heart rate and electrocardiogram monitors. The treadmill has special sensors under the belt to record the pressure of each footfall, to detect limping that could come with arthritis. Another test times dogs as they pull one-and-a-half times their weight a distance of 40 yards using a pull harness.

It will take years to gather enough data for the researchers to make a definitive statement about the drug’s effects. But funds have already been allotted to provide the dogs with a high quality of life until they die of natural causes.

Twice a day the dogs go outside for play time. As soon as the kennel doors open, the dogs, tongues flapping, scurry excitedly down a long hallway toward the light of an open door that leads to three separate fenced fields where they play, run, sniff the grass and greet the student volunteers outside.

It reminds Huson of her childhood, when her family owned as many as 50 sled dogs.

“I used to train dogs to run all the time,” Huson said. “Now we’re training them to run in a slightly different scenario. It’s fun and rewarding. And, it’s therapy for us.”

In an international, multi-institutional effort, Cornell’s Food Science Department will research how to increase iron and zinc absorption, thanks to a Bill &amp;amp; Melinda Gates Foundation grant.

More than 300 faculty, staff and students from Cornell and the new Cornell Global Hubs gathered Nov. 16-17 to discuss ideas for the next universitywide Global Grand Challenge.