Shariah Harris '20, a trailblazing polo star, has been breaking barriers since age 8

|
By Austin Overmann
Shariah Harris ’20 has been called “trailblazer” and “barrier-breaker,” and the Cornell women’s polo star does embody those labels. But she doesn’t let them define her.

In 2016, as a senior in high school, Harris was named the U.S. Polo Association’s National Interscholastic Player of the Year. And just a year later, she was playing for Postage Stamp Farm at the 2017 Silver Cup tournament, the top tier of polo in the country.

An animal science major at Cornell, Harris’ talent sets her apart from the competition, but her journey to the top also makes her stand out.

Harris grew up in inner-city Philadelphia, one of three children in a single-income household. Her introduction to polo happened by accident after a wrong turn in the Fairmount Park neighborhood landed Harris, her mother Sharmell and her younger brother on the doorstep of Philadelphia’s Work to Ride program.

In a sport dominated by wealthy men, you might think she’s not supposed to be here.

Landing on the doorstep of Work to Ride was a blessing in disguise for Harris and her family.

“We were driving around lost, and I remember my brother noticing the horses first,” Harris says. “After looking around for a bit we decided to go inside, where we eventually met with [founder] Lezlie Hiner to pick up an application.”

Founded in 1992, Work to Ride is a Philadelphia-based nonprofit that promotes discipline, self-esteem, social development, life skills, academic achievement and physical fitness to low-income, at-risk youths though horsemanship, equine sports and educational activities. The program is designed as a long-term program for children ages 7-19 who must commit to at least one year of participation. Participants engage in equestrian activities, get paid to maintain the horse stables and receive after-school tutoring to help maintain grades and assist with college enrollment.

Before joining Work to Ride’s polo team, Harris, who became involved in the program at age 8, first had to learn how to ride, clean the stalls and groom the horses. Work to Ride quickly became a full-time commitment for Harris and her siblings, who would spend entire summer days at the stables.

In her fourth year with the program, at age 12, Harris mustered up the courage to join the polo team. By then, the number of girls enrolled in the program had dwindled, forcing her to play against the boys.

“[A]s I got older they either quit, aged out or got kicked out,” Harris says of the girls. “After a while, I was the only girl there for a long time, and all the boys would be playing polo. I watched them play for a while before deciding that I didn’t want to sit on the sidelines while they were having fun.”

Playing against the guys hardened Harris, who’s known as one of the more physical players in intercollegiate women’s polo.

“Playing with the guys took me a step beyond where I was at,” Harris says. “I originally started playing on the women’s team, and I’d say I was decent. But when I got a chance to play with the guys, they didn’t take it easy on me. That’s what first started to fuel the competitive drive.”

Work to Ride has opened doors for Harris. Trips to tournaments across the country and around the world have allowed her to experience different cultures and learn polo from some of the best in the world. That experience has put Harris in a position to give back to the program in any way she can.

“I go back and visit every time I have a break from school,” said Harris. “I’m still connected with all the kids in the program and Lezlie especially. I can’t talk about my life story without Work to Ride because my life evolved from the program. I owe the program a lot due to how it changed me as a person and gave me direction in my life.” 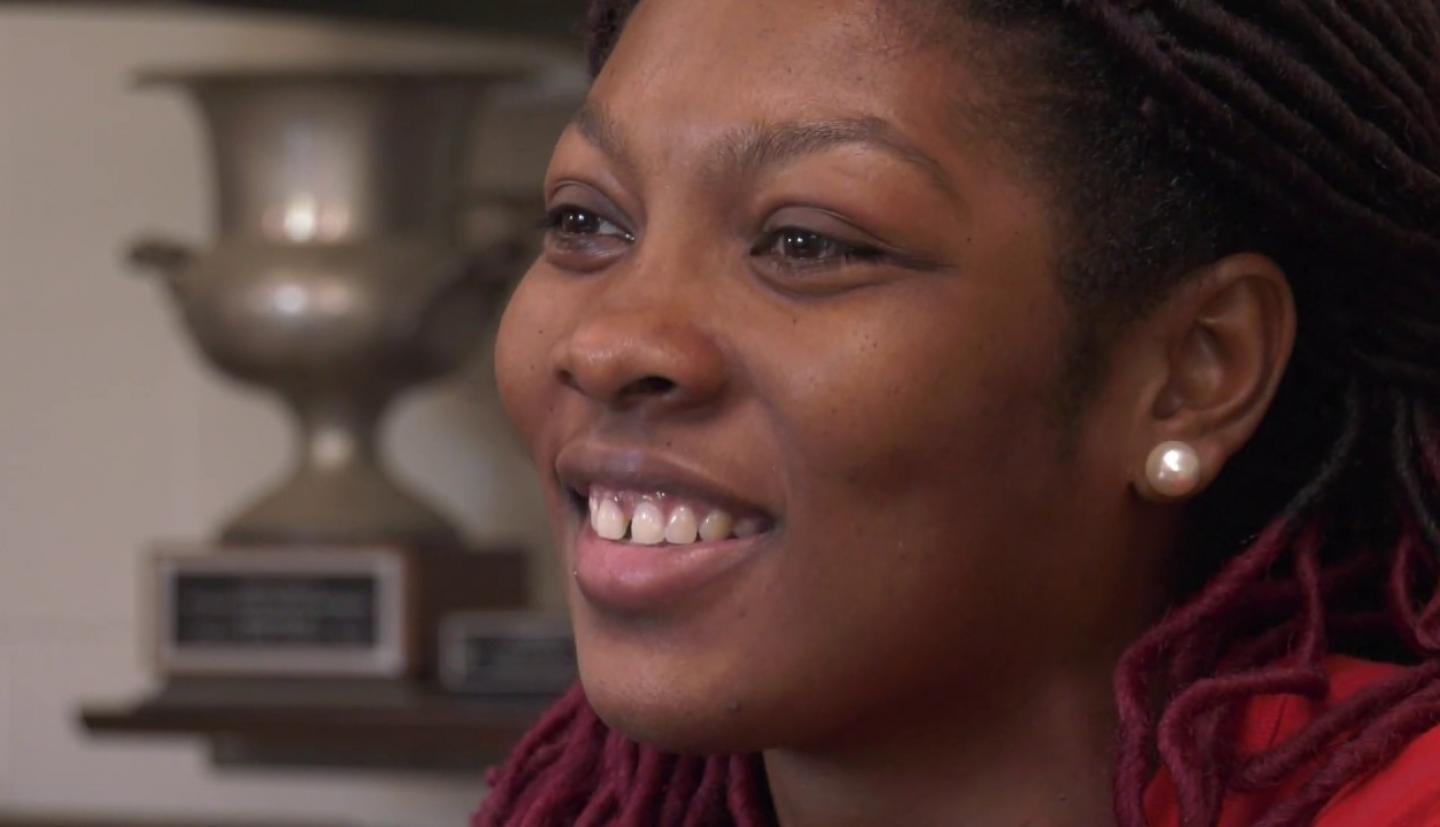 Sought after by several top polo programs throughout the country, Harris eagerly awaited her acceptance to Cornell after her first visit to campus. One trip to Ithaca was all she needed to know she felt at home with the Big Red. Anticipating that her letter of acceptance would arrive via email at any moment, Harris anxiously awaited Cornell’s decision alongside her older sister.

“My sister wanted to be home with me to open it, but by the time 5 o’clock rolled around, I tried to sneak away and open it by myself in case I got denied,” Harris says. “My sister caught me though, and we opened it together. I still remember scrolling down slowly and see the ‘C’ and screaming because we both knew it said ‘Congratulations.’ We called my mom and we all cried, of course.”

Hiner, from the Work to Ride program, was also ecstatic for Harris. She plays a key role in members’ academics by offering tutoring to those who need it. Members of the program are also required to maintain a certain grade-point average in order to ride.

“I wanted to keep it a secret from Lezlie because I was going to the barn later that day and wanted to let her know in person,” Harris says. “I handed her the acceptance letter, and she screamed and cried with me, too. It was something that everyone in my life was invested in, and it meant a lot because I didn’t think going to an Ivy League school was something accessible for me.”

In addition to succeeding in the classroom while under Hiner’s guidance, Harris also achieved greatness on her horse, as evidenced by the USPA National Interscholastic Player of the Year honor she took home in 2016. Harris’ skill on the horse developed further throughout her four years at Cornell, as she became both a joy to coach and a nightmare to coach against.

“Coaching against Shariah was a challenge you don’t deal with often in women’s polo,” says Branden Van Loon ’13, the Peter B. Orthwein ’68 Head Coach of Polo at Cornell. Van Loon coached against Harris while serving as Yale’s head coach from 2016-18.

“She has such a unique skill set with strengths that aren’t typical of women’s players,” he says. “Trying to shut that down was always an interesting challenge and a learning experience as a coach.”

Van Loon, who took the reins at Cornell last season, has enjoyed the advantage of having Harris on his team.

“It has been an epic journey getting to coach Shariah because there are so many possibilities for her,” said Van Loon. “Shariah is easily one of the top 10 intercollegiate players, and she’s right there as one of the top 10 women’s players in the country overall, both in the arena and on grass.”

While Harris is already one of the most skilled players in the country, it’s her mind for the game and her leadership that sets her apart from the rest.

“Shariah’s leadership has been stellar for our team,” Van Loon says. “She has been amazing with bringing up the less experienced players in the program and helping them learn the game.”

Harris’ journey donning the red and white isn’t over yet however. The team hopes that a strong spring semester will put them in a position to bring a national championship back to Ithaca for the first time since 2016.

As she prepares to graduate from Cornell in the spring, Harris finds herself in a mentorship role with the current generation of kids coming through the Work to Ride program.

“It’s kind of weird being in a mentor position now,” said Harris. “I still see myself as someone who needs a mentor and needs to learn more. If I can do that for others though, I would love to.”

Coming up through the program herself, Harris didn’t have the luxury of a “Shariah Harris” to look up to and show her how things are done.

“It would have been great to have someone who looks like me to look up to when I was younger,” said Harris. “Someone once told me that if I kept waiting for someone who looked like me to fill that role, then I’d still be waiting. I want to give someone the confidence to do it when they don’t think they can.”

Despite not viewing herself as someone deserving of the role model title just yet, Harris hopes that her story will inspire others like her to pursue their dreams.

“I’ve been given the label of ‘trailblazer,’” said Harris. “If that means I can open doors and break barriers for other black women who don’t think they can do it, that’s good enough for me. It’s kind of weird to have that label, because for me I’m just playing the sport for the love of the game.”

Quadrupling turbines, U.S. can meet 2030 wind-energy goals
“The United States currently produces about 7% of its electricity from wind energy,” said Sara C. Pryor, professor in the Department of Earth and Atmospheric Sciences. “This research shows that a quadrupling of the installed capacity of wind...

Physics tool helps track cancer cell diversity
A Cornell-led team took a novel, interdisciplinary approach to analyzing the behavior of breast tumor cells by employing a statistical modeling technique more commonly used in physics and economics. The team was able to demonstrate how the...
END_OF_DOCUMENT_TOKEN_TO_BE_REPLACED