|
By Blaine Friedlander
Share
How will climate change affect the world’s dinner plates?

“Our Changing Menu: Climate Change and the Foods We Love and Need,” a new book from an imprint of Cornell University Press, presents a global climate tour of Earth’s foods – from vegetables, grains and meats to beverages and desserts – from the perspective of climate reality and explains how a warming world will affect your dinner plate.

The book, being released April 15 by Comstock Publishing, was written by Michael Hoffmann, Cornell professor of entomology emeritus; writer Carrie Koplinka-Loehr; and Danielle L. Eiseman, a visiting lecturer in the Department of Communication.

“We have seen more record-breaking heat, more intense storms, melting ice, warming oceans and rising seas,“ said Hoffmann, a faculty fellow at the Cornell Atkinson Center for Sustainability. “Climate change is a threat in the present and your meals will likely be quite different in just a few decades.

Rice, for example, is a ubiquitous grain in more than 100 countries and provides half of the calories for 520 million people living in Asia. In its many forms, this grain is grown submerged in water, or as upland rice, grown mostly dependent on rainfall.

But the United Nations’ Food and Agriculture Organization warns that unless agricultural practices improve, water scarcity and high temperatures could reduce rice yields in India, Indonesia, the Philippines, Thailand and Vietnam to 50% of today’s levels by the year 2100.

As avocados gain popularity in the U.S., each pound of the fruit requires an average of 142 gallons of water over a 14- to 18-month growing period, according to the authors. A mature tree in California can produce 60 pounds of avocado annually, but growers in California must find water and contend with drought and warming temperatures. This means crop yields could drop by 40% by 2060 – all due to climate change. The future of growing avocados in California may not remain viable, the authors said. 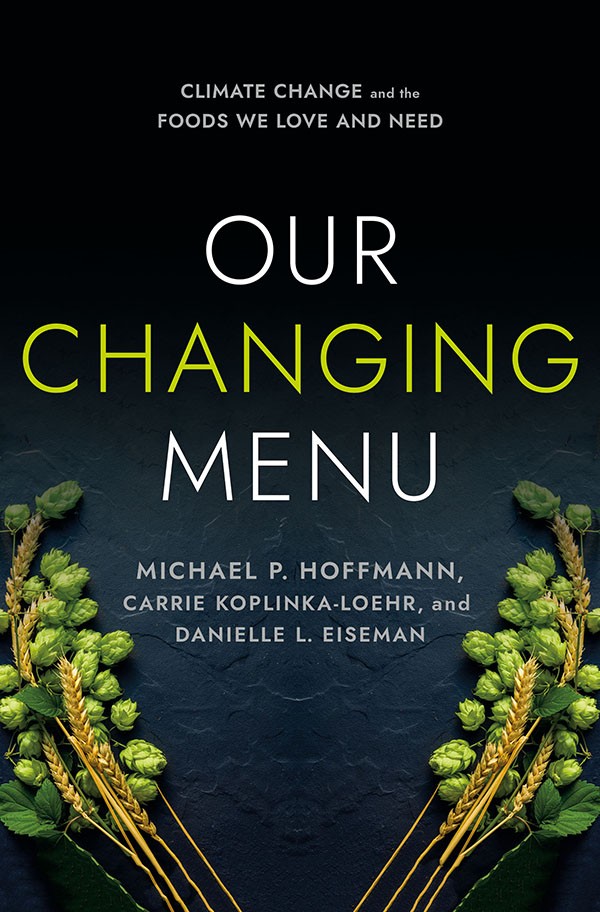 In conducting research for the project, Koplinka-Loehr was surprised at how many food crops face climate change risks. “I am taken with how many threats exist,” she said. “Of all the agricultural things that could go wrong, on top of the variations in the weather, really large changes occur in the climate.”

The book’s interactive and curated website offers resources on becoming climate literate and building community around solutions, as well as suggestions on how to add more plants to your diet and reduce your own climate footprint.

The website’s ingredient database presents the latest information on the effects of climate change. Under chocolate, users can learn that a severe drought in Bahia, Brazil (2015-16) led to a 15% decline in cacao trees, with a nearly 90% decrease in yields. For bananas, find that Black Leaf Streak Disease, encouraged by warming conditions in the Caribbean and Latin America, may reduce the crop by 80%. Droughts also curtail hop growing: In 2015, German beer production suffered a 25% loss from the previous year.

“We have woven the love and celebration of food into making a case on handling climate change,” said Eiseman, a chemist and classically trained French chef.

“Our book is a way for readers to experience a connection to nature and the environment without thinking that they need a science background or a specialized college degree in order to understand climate impact.”

Despite innumerable challenges, there is hope and there are solutions, Hoffmann said. Worldwide, scientists are developing crop varieties that are more resilient and improving predictive models to help those growing food know what to expect.

Farmers, the stewards of the land, are adopting practices that reduce risk to crops and increase resilience, and food industries are stepping up. “Progress is being made, but we have a long way to go,” Hoffmann said. “It’s going to require us to join forces along the entire food chain —   farmer to consumer — to keep the menu stocked. Everyone one of us has a role to play.”

Support for the book and website were provided by the Towards Sustainability Foundation and the Podell Endowment Award for Research and Scholarship.

Header image: In 2015, droughts affected hop yields in Europe, according to the new book. Hop production was down 25% in Germany from the previous year. Photo provided

Policy, farm management help China mitigate climate change
Production of animal protein in China has increased by 800% over the past 40 years, but new research shows why the amount of climate-warming nitrous oxide released from this animal farming has not risen as quickly.

Applications open for $3M Grow-NY competition
In its four years, the competition has received applications and interest from more than 1,000 businesses in 32 states and 37 countries. In all, 59 finalists have been selected to date, with 21 winners sharing $9 million in startup funding as well as mentorship and networking benefits.
END_OF_DOCUMENT_TOKEN_TO_BE_REPLACED