|
By Blaine Friedlander
The combination of ocean warming and an infectious wasting disease has devastated populations of large sunflower sea stars once abundant along the West Coast of North America, according to research by Cornell University and the University of California, Davis, in Science Advances, Jan. 30.

“At one time plentiful in nearshore waters, the sunflower sea stars right now cannot be found off the California coast and are rare into Alaska,” said Drew Harvell, Cornell professor of ecology and evolutionary biology, a co-lead author. “Numbers of the sea stars have stayed so low in the past three years, we consider them endangered in the southern part of their range, and we don’t have data for northern Alaska.”

Since 2013, sea star wasting disease has brought about massive mortality in multiple sea star species from Mexico to Alaska. The East Coast has not been immune, as the disease has affected the shores from New Jersey to New England.

Diego Montecino-Latorre, a wildlife epidemiologist with the UC Davis One Health Institute and a co-lead author, said the sunflower sea star continues to decline even in the deepest ocean and it is not recovering in the same way experienced by the intertidal Ochre star. He said: “This is likely because this disease has many hosts, and other species that tolerate the pathogen better may spread it to the sunflower star,” he said.

Global warming due to a changing atmosphere is likely a major factor. “The heat wave in the oceans – a product of increasing atmospheric temperatures – is exacerbating the sea star wasting disease,” said Harvell, a fellow at Cornell’s Atkinson Center for a Sustainable Future. “It’s a lethal disease, and when you add a higher temperature to that, it kills faster, causing a bigger impact.” 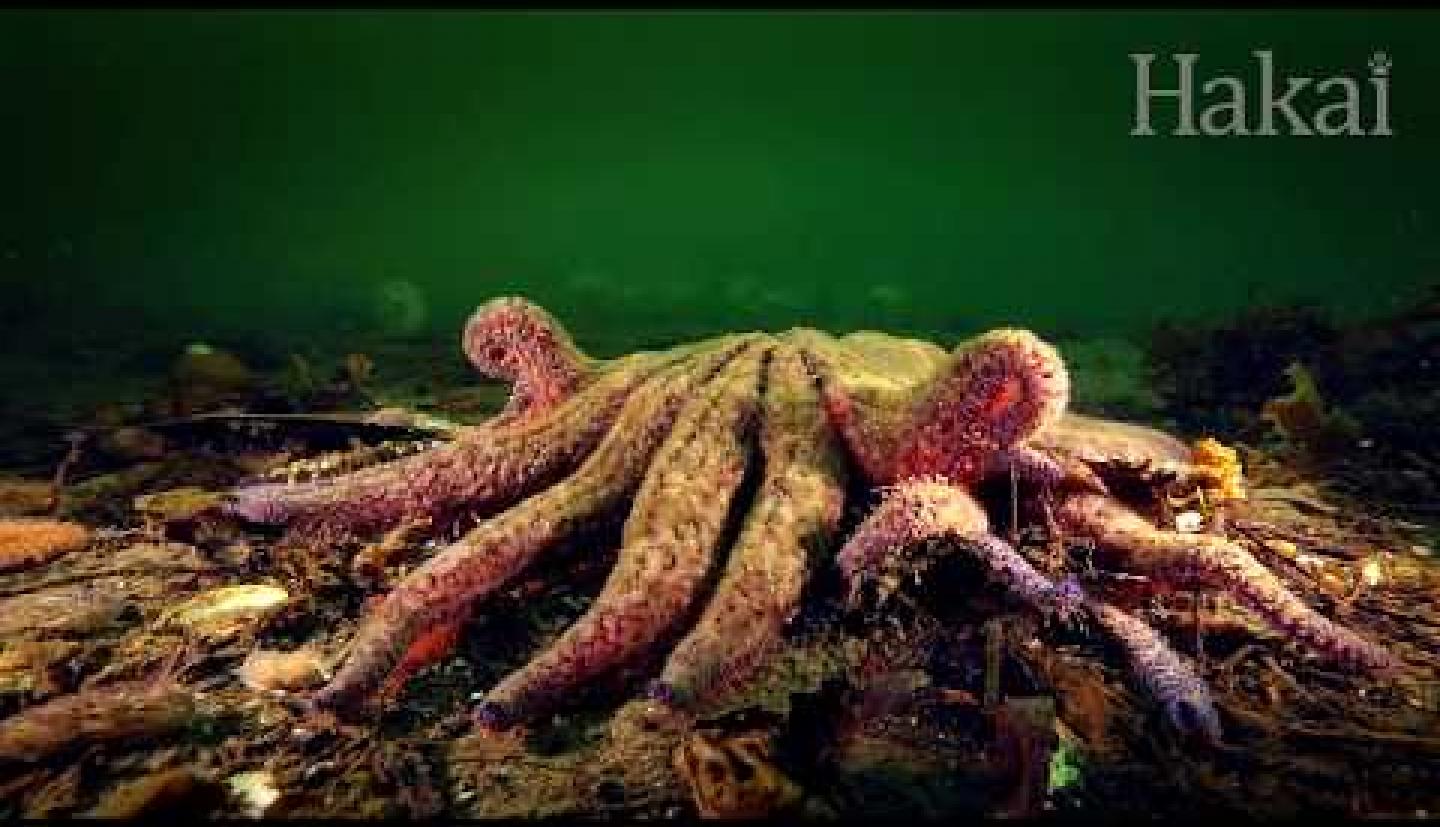 Fisheries depend on nearshore kelp forests to form a healthy environment for fish and the broader oceanic ecosystem. With the demise of sunflower sea stars, sea urchin populations in some areas have exploded, substantially reducing the kelp, Harvell said.

The sunflower sea star is large, about the size of a manhole cover, and possesses an enormous appetite. It crawls over the seafloor like a robotic vacuum cleaner, munching on everything in its path.

For this research, “Disease Epidemic and a Marine Heat Wave Are Associated with the Continental-Scale Collapse of a Pivotal Predator (Pycnopodia Helianthoides),” the other partner institutions were Simon Fraser University, Stanford University, Hakai Institute and the National Oceanic and Atmospheric Administration (NOAA)

Between 2006 and 2017, scientists and trained citizen scientists with Reef Environmental Education Foundation (REEF) conducted 10,956 roving-diver surveys from Southern California to Alaska. Before 2013, divers reported an abundance of sea stars, but between 2013 to 2017 the population collapsed.

Scientists from Simon Fraser University and the Hakai Institute confirmed the loss from remote Calvert Island in British Columbia. The ocean warming recorded at REEF locations corresponds to an increase in water temperature by up to 4 degrees Celsius that started in 2014.

NOAA scientists surveyed sunflower sea stars in thousands of deep trawls from Mexico to the Canadian border and recorded 100 percent decline in all states in deep water down to 1,000 meters.

The research was supported by the National Science Foundation, Natural Sciences and Engineering Research Council of Canada, NOAA and the Department of Commerce.

In mid-April, the University of California Press will release Harvell’s new book, “Ocean Outbreak: Confronting the Rising Tide of Marine Disease,” on the oceanic epidemics that are impacting our food chain and proposing solutions to slow a looming global environmental disaster.

The SUNY Chancellor’s Graduate Fellowship is a one-time, one-year grant that incentivizes outstanding students at four-year institutions in the state university system to enroll in SUNY graduate programs. The scholarship provides $5,000 in...

Robots armed with UV light fight grape mildew
Researchers at Cornell AgriTech in Geneva, New York, have partnered with SAGA Robotics in Norway to develop the first commercial robotic units, and the autonomous vehicle robots will appear on the market this year. This spring, the researchers...
END_OF_DOCUMENT_TOKEN_TO_BE_REPLACED