How does a giant, foul-smelling plant from the tropics fare in an outdoor garden in New York? We will soon find out.

One of Cornell’s Titan arums (Amorphophallus titanum) – a rare plant also known as a “corpse flower” for the deathly odor it produces at flowering – has broken dormancy and is preparing to bloom this summer.

But instead of unfurling its pungent inflorescence indoors in a warm, controlled environment, this giant flower will undergo its smelly transformation outdoors in the College of Agriculture and Life Sciences’ (CALS) Minns Garden. It’s believed to be the first time a corpse flower has ever bloomed outside in a temperate region, according to Kevin Nixon, professor in the Plant Biology Section of the School of Integrative Plant Science (SIPS).

Titan arums, native to the sweltering tropical forests of Sumatra, produce the largest unbranched inflorescences in the plant world, reaching heights more familiar to the tallest professional basketball players. They have captured the fascination of the public around the world for their huge size and extraordinary reproductive strategy: When flowering, the plants create high heat, and produce purple coloring and strong odors that mimic rotting flesh, to attract pollinating insects that feed on carrion.

This Titan arum, named Carolus, is one of two in the Liberty Hyde Bailey Conservatory’s collection. When Carolus last bloomed in 2015, it reached 76 inches at flowering.

As of July 26, Carolus stood 41 inches tall and was growing about three inches per day. But predicting exactly when the inflorescence will peak will be especially difficult as the cooler temperatures outside could slow its progress. Cornell’s plant experts estimate that Carolus could flower in early to mid-August, but there is no prior data with which to predict how it will acclimate to conditions and variables such as rain, changing light, and the risk of severe weather that could disrupt growth or even cause the plant to not fully develop.

That uncertainty is part of the fun, says Karl Niklas, the Liberty Hyde Bailey professor in the Plant Biology Section of SIPS.

“Whatever happens, we’ll learn something new this year,” says Niklas. “The Titan arum’s extravagant characteristics never fail to capture people’s attention. These plants are wonderful teaching tools to showcase to the public just how fantastic the plant world can be.” 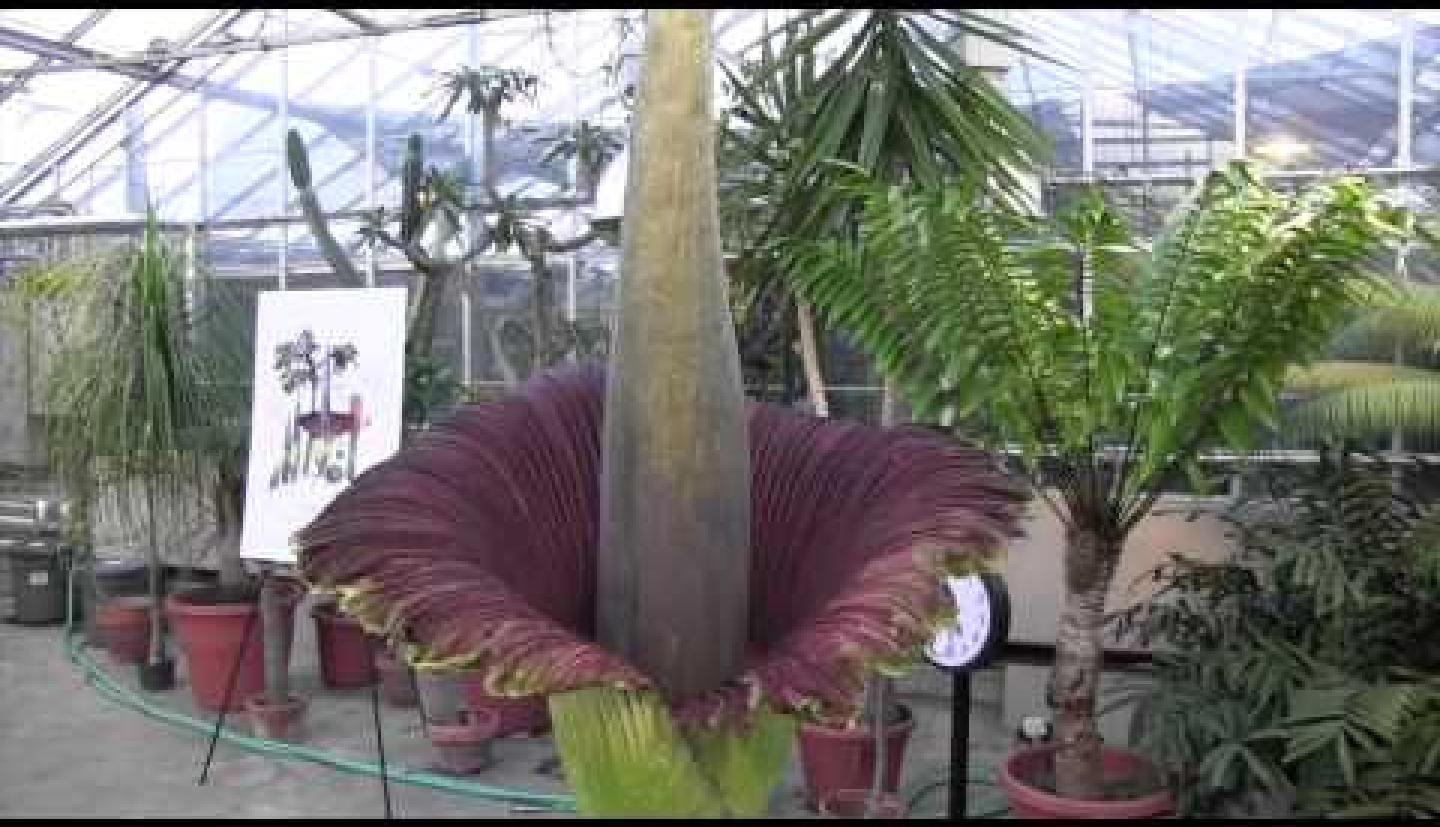 Assuming Carolus does bloom fully, visitors can expect a different experience from previous Titan arum flowerings. Outside, the odor is likely to be more diffuse and less overwhelming. But instead of being visited by just a few stray insects that managed to find their way inside the conservatory, the outdoor bloom is likely to attract significant numbers of insects.

This inflorescence is expected to be smaller than previous flowerings. Carolus has been running about two-thirds to three-quarters of its height during similar growth stages compared to times it bloomed inside.

“The smaller stature is likely a response to the cooler temperatures,” says Paul Cooper, the Cornell University Agricultural Experiment Station greenhouse grower who maintains the collection.

Cooper planted Carolus’ massive 100-pound corm – an underground structure similar to a flower bulb – on June 14 in a pot in Minns Garden on Tower Road, where the public is welcome to visit the plant at any time. The nearest public parking is in the Peterson Lot at the corner of Judd Falls and Tower roads.

“We’re looking forward to having more visitors to the garden this year,” says Nina Bassuk, professor in the Horticulture Section of SIPS, who supervises the garden. “We hope they’ll stick around to take in the other beautiful plants we grow there.”

The nearby Liberty Hyde Bailey Conservatory, home to more than 600 plant species, will be open most weekdays from 10 a.m. to 3 p.m. Inside, Carolus’ sibling, Wee Stinky, which last bloomed October 2016, is now in its vegetative phase, where its single leaf towers up into the rafters in the Conservatory’s Palm House.

For more information and to track the progress of the corpse flowers, visit the Liberty Hyde Bailey Conservatory website.

Craig Cramer is communications specialist in the School of Integrative Plant Science.