Gov. Andrew Cuomo thinks New York can be the national leader in industrial hemp, and he is investing in agricultural research to help make it happen.

New legislation signed by Cuomo at Cornell on July 12 removes legal obstacles impeding access to hemp seed in a bid to streamline research and farming opportunities. The bill classifies industrial hemp as an agricultural commodity and creates a working group to advise the state on research and policies concerning a plant that is of the same genus and species as marijuana but contains only traces of the psychoactive chemical THC.

Cuomo, touting the state’s strong agricultural economy, said he sees hemp as a commodity with the potential to boost job growth in agriculture and manufacturing. He committed $5 million in state funding to support research into the production of industrial hemp, with $1 million to fund immediately an ongoing partnership between the College of Agriculture and Life Sciences (CALS), SUNY Morrisville, the New York State Department of Agriculture and Markets, and Empire State Development.

"Cornell is such a gem for the entire state," says @NYGovCuomo as he announces new funding for our hemp research https://t.co/Z61NO2KmG0 pic.twitter.com/PbBrsJdSVg

This summer, under the federal Industrial Hemp Farming Act of 2015 allowing hemp research trials, Cornell has been undertaking research in Ithaca, the New York State Agricultural Experiment Station (NYSAES) in Geneva, New York, and with 25 partner farms across the state. More than 1,700 acres will be under cultivation this season as Cornell taps into its multidisciplinary expertise in plant pathology, breeding, genetics, seed technology, soil and entomology to determine optimal growing practices in the state’s diverse growing conditions.

Drawing on New York’s legacy as an innovation leader, especially in agriculture, Cuomo was clear about his aspiration: “We want to be the nation’s leader in hemp production.”

Kathryn J. Boor, the Ronald P. Lynch Dean of CALS, said: “Making industrial hemp a success in New York depends on smart investment in research in the agricultural sciences. Backed by Cornell researchers and our strong network of agricultural expertise in every county in the state, New York is poised to be a national leader in this emerging crop.”

She added, “Gov. Cuomo’s continued support provides our state’s farmers the opportunity they need to innovate and compete in this exciting new market."

A thriving hemp market already exists, as the plant is used to make food, paper products, clothing, consumer goods and a multitude of other products. New York is now making it easier to allow farmers to grow a crop that generated nearly $600 million in U.S. sales in 2015.

Christine Smart, interim director of the School of Integrative Plant Science and professor of plant pathology, said the multidisciplinary expertise in the school provides farmers the knowledge they will need for successful production.

She said faculty will focus on everything from secondary metabolites that can be used for medicinal purposes, to breeding varieties that are adapted to New York environments, to field trials that identify the best commercially available varieties that are tolerant of insects and diseases.

Don Viands, professor of plant breeding and genetics, is leading the research trials in Ithaca. Larry Smart, professor of horticulture, is conducting research at NYSAES and leading efforts with partner growers as he and his team measure stand establishment across a variety of soils and planting methods. 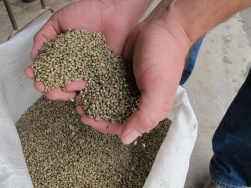 Together with Cornell Cooperative Extension specialists, the researchers will survey for pests and diseases to determine how varying conditions impact yield.

The state also announced $5 million to launch the Industrial Hemp Processors Grant Fund. The program will fund eligible businesses for capital costs up $250,000 related to processing industrial hemp, including new construction and purchase of equipment, according to Cuomo, who envisions industrial hemp as being a boon to processors as well as growers.

At the event, Cuomo praised Cornell for its work in agriculture and other areas of research. “Cornell is such a gem for the entire state, and it does so much good work on so many different levels,” he said, adding that he’s excited about the leadership of President Martha E. Pollack, who in April became the university’s 14th president.

Pollack said Cornell is proud of the university’s roots in New York and is committed to building a better future for the state. “This research will help New York capitalize on this emerging crop and create jobs and opportunities across the state,” she said.

Cornell AgriTech at 140: Growing a more resilient future
As agriculture and food industries move further into the 21st century, there are plenty of tough decisions and uncertainty ahead. But these industries, and Cornell AgriTech, have been here together before. In its 140 years, the station has...
END_OF_DOCUMENT_TOKEN_TO_BE_REPLACED