Tomato breeders have traditionally emphasized traits that improve production, like larger fruits and more fruits per plant. As a result, some traits that improved other important qualities, such as flavor and disease resistance, were lost.

Researchers from the Boyce Thompson Institute and colleagues from partnering institutions including Cornell have created a pangenome that captures all of the genetic information of 725 cultivated and closely related wild tomatoes, establishing a resource that promises to help breeders develop more flavorful and sustainable varieties.

As described in a paper published May 13 in Nature Genetics, the researchers found 4,873 new genes and identified a rare version of a gene that can make tomatoes tastier.

“The pangenome essentially provides a reservoir of additional genes not present in the reference genome,” said BTI faculty member Zhangjun Fei, adjunct professor in the School of Integrative Plant Science (SIPS). “Breeders can explore the pangenome for genes of interest, and potentially select for them as they do further breeding to improve their tomatoes.”

The first tomato genome sequence was a large modern variety published in 2012, revealing approximately 35,000 genes and facilitating crop improvement efforts. Since then, several hundred additional tomato genotypes have been sequenced.

The current study is the first to mine all of these genome sequences – as well as another 166 new sequences generated by the researchers – to hunt for genes that were absent from the reference genome.

“During the domestication and improvement of the tomato, people mostly focused on traits that would increase production, like fruit size and shelf life,” Fei said, “so some genes involved in other important fruit quality traits and stress tolerance were lost during this process.” 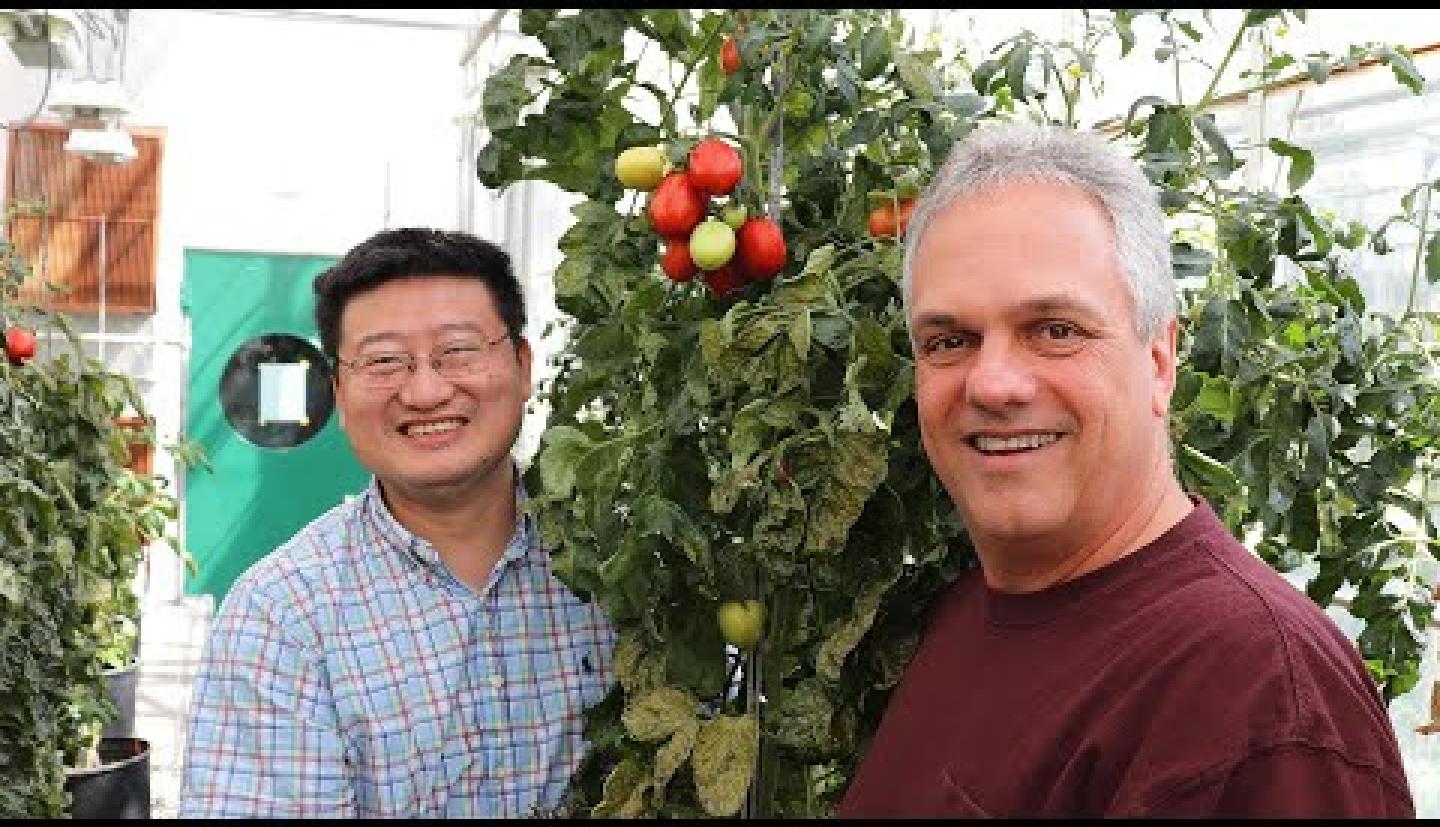 Play Science in Seconds - New genomic resource is sweet science for tomatoes
The researchers found that genes involved in defense responses to different pathogens were the most common group of genes that were missing in the domesticated varieties of tomato.

“These new genes could enable plant breeders to develop elite varieties of tomatoes that have genetic resistance to diseases that we currently address by treating the plants with pesticides or other cost-intensive and environmentally unfriendly measures,” added James Giovannoni, a BTI faculty member, adjunct professor in SIPS and a USDA scientist. Giovannoni and Fei are co-corresponding authors on the paper.

In addition to recovering these “lost” genes, the researchers also analyzed the pangenome to find genes and gene mutations that are rare among the modern cultivars.

This analysis identified a rare version of a gene, called TomLoxC, which contributes to a desirable tomato flavor. The rare version is present in 91.2% of wild tomatoes but only 2.2% of older domesticated tomatoes.

“The rare version of TomLoxC now has a frequency of 7% in modern tomato varieties, so clearly the breeders have started selecting for it, probably as they have focused more on flavor in the recent decades,” Giovannoni said.

The researchers also discovered a new role for the TomLoxC gene.

“TomLoxC appears, based on its sequence, to be involved in producing compounds from fats,” said Giovannoni. “We found it also produces flavor compounds from carotenoids, which are the pigments that make a tomato red. So it had an additional function beyond what we expected, and an outcome that is interesting to people who enjoy eating flavorful tomatoes.”

Ultimately, the tomato pangenome could benefit the economy and the consumer, according to Clifford Weil, program director of the NSF’s Plant Genome Research Program, which supported the work.

“How many times do you hear someone say that tomatoes from the store just don’t quite measure up to heirloom varieties?” Weil asked. “This study gets to why that might be the case and shows that better tasting tomatoes appear to be on their way back.”

Tomatoes are one of the most consumed vegetables in the world – although technically we eat their fruit – with 182 million tons worth more than $60 billion produced each year. Tomatoes also are the second most-consumed vegetable in the U.S., with each American consuming an average of 20.3 pounds of fresh tomatoes and 73.3 pounds of processed tomatoes each year.

Aaron J. Bouchie is a science writer for the Boyce Thompson Institute.

Diversification can curb farm waste fires
A trio of Tata-Cornell Initiative researchers writing in The Print argued that the farm waste fires contributing to dangerously high air pollution in North India can best be addressed by incentivizing farmers in the region to grow less rice.

Art and exhibits illustrate hope for climate resilience
Art, sculpture, photos, and prints bring research on climate adaptation and resiliency to life at Cornell Botanic Gardens' Nevin Welcome Center. The exhibits illustrate the value and impact of a collaborative project with faculty and indigenous farmers, fishers, herders, hunters, and orchardists across the globe.
END_OF_DOCUMENT_TOKEN_TO_BE_REPLACED