|
By Susan Kelley
Share
Ed Warner pushes his boat off a sliver of Long Island waterfront that’s been in his family since the 1800s. He is the fifth generation of Warner baymen – the locals’ term for fisherman – to head out to eastern Shinnecock Bay in search of Mercenaria mercenaria, the hard clam.

“Clamming and fishing, they’re in your blood,” says Warner, as Hampton Bays, a coastal village in Southampton, New York, fades into the distance. “It’s a lifestyle, not a job.”

That lifestyle – and Long Island’s coastal ecosystem, economy and culture – have been threatened since the 1970s by increasing degradation in the quality of Long Island’s water. Cornell Cooperative Extension aims to change that, by leading the largest effort ever to restore Long Island's shellfish populations.

Out on the bay, Warner cuts the motor. He slides his mud rake into the water, extending the telescoping handle to 24 feet, and the tines click against the clams. When the rake becomes heavy, he pulls it up. About 100 clams clatter onto the boat’s sorting table.

He gets 20 cents each for large ones, used for chowder, and 30 cents for small ones, eaten on the half shell. “You can average 400 clams an hour, which is pretty good clamming,” he says.

It’s a dramatically different situation just a few miles away, in western Shinnecock Bay, which has struggled with brown tide, a harmful algal bloom, since the 1980s. Brown tide stains clam meat the color of coffee, and while it is safe to eat, it is unappetizing.

“If you open up one of those clams from over there, it’s not that nice creamy colored meat,” Warner says. “Clam dealers will buy them, but then you’ll get a complaint back: ‘I can’t sell these.’” 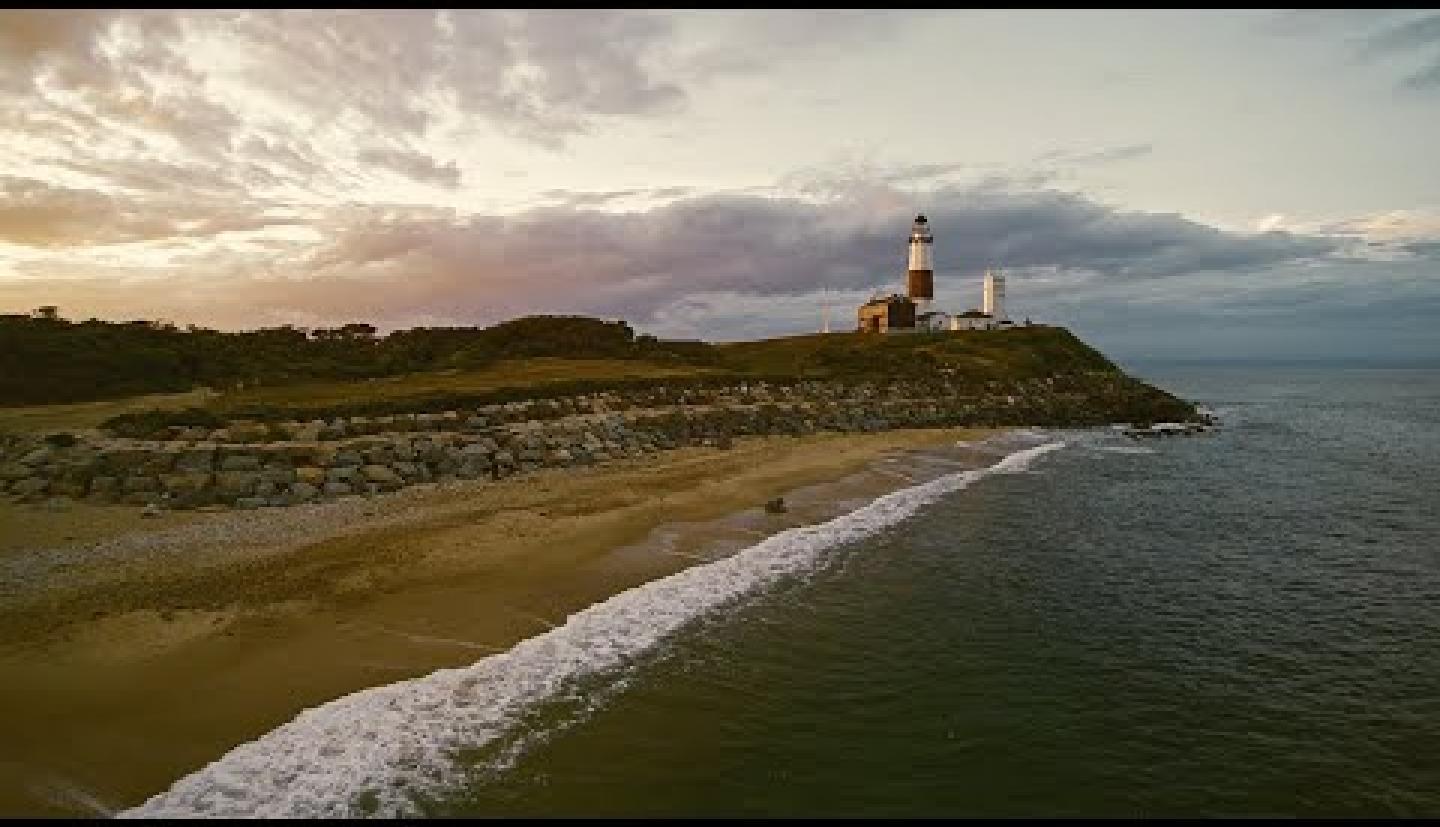 As recently as 50 years ago, more than half the clams eaten in the U.S. were from Long Island. Surrounded by three estuaries, Long Island has the ideal habitat for shellfish, from bay scallops to blue mussels.

“This bay we’re in here is in pretty good shape,” Warner says.

But in other Long Island waters, decades of pollution have taken their toll. In turn, water quality has suffered, as have shellfish. The $6 billion clamming industry experienced a 93% reduction in harvests in the past 25 years, according to the New York state Department of Environmental Conservation.

The project pivots on shellfish’s superpower: An adult oyster can filter up to 50 gallons of water per day, clams about half that. They feed on algae, which can become out of control when there’s too much nitrogen in the water.

Excessive nitrogen and other nutrients catalyze a rainbow of harmful algal blooms – brown, red, rust and mahogany tides – that degrade the water. More than 12,230 acres of Long Island waterways have been closed to shellfishing due to these algal blooms, according to a recent report from the Suffolk County Health Department, and 76% of the nitrogen in the waters of Long Island – home to 40% of the state’s population – comes from faulty septic systems.

To stem that tide, Southampton’s board of trustees has signed up to host a restoration project sanctuary in western Shinnecock Bay. It’s one of the biggest steps the town has ever taken to reclaim its undersea lands, says Warner, who is board president.

“If we don’t start now, it will never get done,” he says.

In time, the benefits of cleaner water will ripple throughout Long Island’s coastal ecosystem and economy. “The commercial fishing, recreational, environmental advantages – it’s a plus all around. It’s a bigger picture than just the project happening,” Warner says.

Twenty miles north, in Mattituck, fisheries technician Chris Mazzeo is lying on his belly on a dock, his arms plunged into the Mattituck Inlet.

He’s ratcheting together 12 mesh-bottomed barrels to make an open-water nursery for young clams. “Ideally you want them in deep water – over 5 feet at low tide,” Mazzeo said.

He’s one of a team of 20 CCE-Suffolk staff making the restoration project a reality.

CCE-Suffolk has been growing shellfish for Long Island towns to plant in their underwater lands since 1991. A 2005 CCE-Suffolk project, planting 6 million Peconic Bay scallops, resulted in commercial catches averaging 1,300% higher than in the 12 years before the program began, and a cumulative economic benefit of $5 million for baymen and $45 million for the region.

Since then, CCE-Suffolk’s aquaculture capacity has taken a quantum leap, thanks to a $5.25 million grant – part of the project – from New York state. The grant enabled CCE-Suffolk to build the largest hatchery in the state, in Southold, where it is growing 179 million shellfish for the restoration project.

“That’s huge, by anyone’s standards,” says Chris Pickerell, M.S. ’93, marine program director. “Nobody’s ever tried it on this scale, in this region.”

The task of spawning hundreds of millions of shellfish is straightforward, he says. His team collected and spawned adult oysters and clams from around Long Island, and fed the resulting larvae increasing amounts of home-grown algae for two to three months. “I liken it to having teenagers in your house – the refrigerator is always empty,” says CCE-Suffolk aquaculture specialist Gregg Rivara.

The tricky part is growing the shellfish big enough to withstand being eaten by crabs and other predators.

That’s where Mazzeo’s clam nursery comes in. Rivara and his colleagues have perfected the design of the nursery, called a floating upweller system (FLUPSY), to grow young clams quickly, with a constant supply of algae-rich water. CCE-Suffolk will install about 40 FLUPSYs throughout Long Island. “We have teams of technicians traveling the island with the help of volunteers, cleaning them, sorting them, washing them down every week,” Pickerell says.

Public outreach is woven throughout the project. Towns and individuals who host FLUPSYs in their waters can keep the systems to raise their own shellfish after the project is complete. Schoolchildren learn about shellfish biology through a CCE-Suffolk curriculum. “It’s important to engage the public in the whole process, so they understand how this works,” Pickerell says. “It fosters a sense of stewardship, and that’s really important to us."

50
gallons of water filtered each day by one adult oyster

When the clams grow to the size of a quarter, staff and volunteers will plant them in the sanctuaries’ waters and monitor them.

Oysters grow a little differently, needing something solid to attach to. So the team places larvae, in waves of 10 million at a time, in 12-foot-diameter outdoor tanks filled with empty oyster and clam shells. The larvae swim at first. But as they grow, they get heavier, sink and affix themselves to the shells as individual “spat,” the term for larva.

These shells, loaded with tiny oysters, are transported to the sanctuaries’ shallow waters. “We motor over the site and just spread them – almost like you’re spreading grass seed,” Pickerell says. “You want a thin layer so you get as much coverage as possible and reduce predation.”

The five sanctuary sites were chosen specifically for their moderately compromised water. In clean water, the shellfish won’t do much to improve conditions; in heavily polluted waters with high densities of harmful algal blooms, they won’t survive.

“We’re hoping to improve water quality as the algae-laden water passes through these areas with high densities of shellfish that can filter out the harmful algae,” Pickerell says.

The shellfish are not intended to be eaten. In most cases, the sanctuaries are in uncertified waters, where the New York Department of Environmental Conservation says it’s neither safe nor legal to harvest shellfish.

Eventually the shellfish will spread beyond the sanctuaries, as the larvae ride the waves. “They can wind up with their parents or miles away,” Rivara says, “depending on the current, the wind and other factors.”

Adds Pickerell: “They’ll spread into the open water, and people can harvest them, whether it’s for a living or just to dig up some clams for their dinner table.”

The project’s biggest benefit, Rivara says, will be the chain reaction it sets off.

It starts with shellfishes’ ability to keep algal blooms under control. That increases water clarity, which allows sunlight to penetrate deeper into the water. That enables seagrass, such as eelgrass, to grow more abundantly. “The problem with the brown tides we had in the 1980s and 1990s was there was so much shading, we lost shellfish and eelgrass because of it,” Rivara says.

Seagrass, in turn, creates habitat for other sea creatures. “Think of it as a rainforest,” Rivara says. “Animals – bay scallops, blowfish, seahorses – can hide from predators in there.”

Oyster reefs create habitat, too, in tidal areas. “We’re creating so many nooks and crannies on an otherwise sandy bottom,” Rivara says. “It’s amazing, the diversity and abundance of marine plants and animals that make it their home.”

Those habitats improve the health of the estuaries, which offer breeding habitat for fin fish. Those fish provide food for larger ocean animals, says Adrienne Esposito, executive director of Citizens Campaign for the Environment, a regional nonprofit. “It’s a ripple effect,” she says. “And it doesn’t stop there. Healthy estuaries promote healthy wetlands, where turtles breed and migratory birds and shore birds raise their young.”

The restoration project will also benefit the commercial fishing, sport fishing, tourism and real estate industries that are the lifeblood of Long Island’s economy, Esposito says.

The stakes are high. For example, in the Shinnecock Inlet alone, fishermen catch 10 million pounds of fish per year – including 39 species, primarily bluefish, angler and skate – worth $8 million. Up to 40 commercial fishing vessels and countless sport fishing boats use the inlet regularly, generating $250,000 in boat slip revenues, according to a 2018 U.S. Army Corps of Engineers report.

“Is the water clean? That’s the question Long Island has always asked,” Esposito says. “When you can actually see your food being pulled out of the water and served to your family, you understand the importance and necessity of clean, healthy water.”

She runs two popular restaurants and a marina, perched on the Shinnecock Inlet with stunning views of Shinnecock Bay. Down the road, multimillion-dollar homes dot the barrier island that forms the bay’s southern border. Boaters come by after they’ve dug clams at the nearby sandbar.

“The pristine water and the surrounding area is why people want to come down here, why they want to go to the beach, why they want to fish,” Oakland says. “The reality is, that’s our livelihood. If that changed, we wouldn’t survive out here.”

It’s a Tuesday morning in July and Oakland has just finished talking with her head chef about the need for more staff. The night before, Oakland’s Restaurant and Marina served 417 dinners; her other restaurant, Sundays on the Bay, served 270.

Owners of summer homes and the sport fishing boats that dock at the marina come there for the seafood – steamers, flounder, fluke, pan-seared scallops – all from the local waters. “That is what people want,” Oakland said. “People want to know it’s not from overseas.”

Abundant local seafood is the basis of her business, which is why she supports the restoration project.

“That is a question I get all the time: ‘Is your seafood local? How local is it?’” she says. “If I can say, ‘It’s from that bay right over there,’ that is only going to boost our business.”

The week before, Ed Kurosz, who sells real estate in Quogue, sat at Oakland’s outdoor bar to enjoy the sunset and the local fare.

Hannah Rudt ‘23: I Could Not Help but Smile
As Community Food Systems minors, students engage with community-based organizations to gain rich, hands-on experiences in the food system. This is a story about Hannah Rudt ‘23’s reinvigorating connection to the food system during the Covid-19...
END_OF_DOCUMENT_TOKEN_TO_BE_REPLACED