How can we protect New York state’s berry industry?

|
By Krisy Gashler
Share
Dale Ila Riggs knew the pests were coming for her berries. It was summer 2012, and Riggs watched as the invasive spotted wing Drosophila, a type of fruit fly, descended on The Berry Patch, her 230-acre farm in eastern New York near the Massachusetts border.

“We lost 40% of our blueberry crop that year to the insects,” said Riggs, who has farmed her Rensselaer County berry fields for 23 years. “The only reason we didn’t lose all of our raspberry crop was because I was in our raspberry tunnel spraying every three to four days. We had never sprayed before; we never had to. This changed everything.”

Cornell researchers discovered spotted wing Drosophila (SWD) in New York state in fall 2011. By the next year, blueberry fields were swarmed by the insects. Growers lost up to 80% of their blueberry crop, and nearly all raspberry and blackberry crops were destroyed.

“When berry growing in New York is good, it’s great,” Riggs said. “When a season is bad, watch out.” 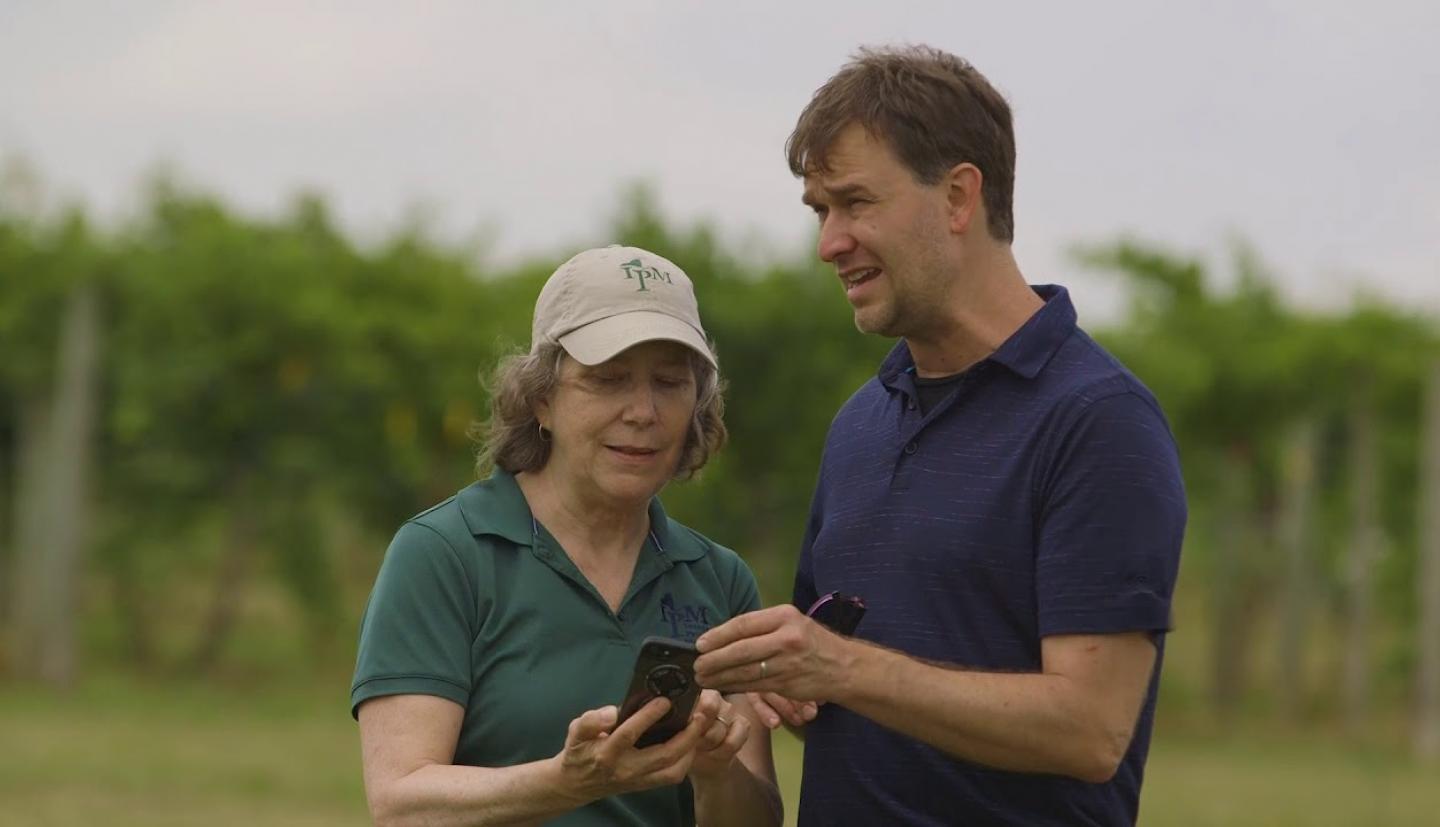 Berry production is a $20 million industry in New York, with strawberries leading the charge. Growers and researchers from the College of Agriculture and Life Sciences (CALS) have worked together to determine what needs to be done to protect the economic livelihood of growers – and the sweet rewards for consumers.

The researchers are members of the only comprehensive berry team in the Northeast, combining expertise in horticulture, entomology, plant pathology, agricultural economics, plant breeding and management practices.

The work we’re able to do for New York is significant, but it’s only part of the picture. People from all over come to us for information. The impact we’re able to have is really broad and wide and deep.
Marvin Pritts, professor in the Horticulture Section of the School of Integrative Plant Science

“The devastation from SWD overwhelmed our berry growers so much that collaboration was essential for fast progress,” said Juliet Carroll, fruit coordinator for the New York State Integrated Pest Management Program, based at Cornell AgriTech in Geneva, New York.

“Within one year,” Carroll said, “our berry team turned the tide on SWD so that berry production could continue to be a viable industry in New York.”

The first brush with SWD in 2012 cost New York farmers about $5 million in berry production, said Greg Loeb, professor of entomology based at Cornell AgriTech.

“We had growers that year who just had to close shop,” Loeb said. “They had no product to sell. They lost half their season.”

The invasive insect attacks fruit just as it’s beginning to ripen. Females lay their eggs in soft-skinned fruits, especially berries and cherries. Within a few days, fruit begins to wrinkle and crater as larvae feed and grow.

Pests, including those from southern states and others from overseas, are presenting new challenges to growers.

“Climate change is pushing pests into new territory,” Loeb said. “Southern pest problems are becoming problems here in New York and the Northeast, and it’s only going to get worse.”

Loeb is working to understand the biology of the insect, how it survives winters, what signals it uses to identify susceptible hosts, and what odors it might find repellant.

Loeb, along with Miguel Gomez, associate professor of applied economics in the Charles H. Dyson School of Applied Economics and Management, and colleagues at other universities, are investigating SWD with support from a $6 million grant from the U.S. Department of Agriculture’s National Institute for Food and Agriculture.

Managing on the farm

The spread of SWD starting in 2012 forced growers to confront a challenge they didn’t expect – and weren’t prepared for. “Prior to SWD,” Carroll said, “many growers had never applied pesticides; they didn’t even own a sprayer.”

She began leading workshops that summer to help growers cope with the new pest.

“Without programming like this, berry production in New York would be a nightmare,” said Gary Craft, owner of G&S Orchards in Macedon, New York. “Juliet and the team are keeping me in business with their constant monitoring of SWD in my fields, spraying threshold recommendations and out-of-the-box management techniques.”

Carroll is testing the idea of attracting hummingbirds to berry patches. Hummingbirds can eat up to 2,000 small insects per day, and they don’t bother most fruit. In initial test plots in New York, Carroll placed 25 hummingbird feeders per acre, which resulted in an uptick in hummingbird populations and up to 59% reduction in SWD found in traps.

“By keeping those feeders in place year in and year out, the hummingbirds will remember and they’ll come back and become more populous where we need them,” she said.

Berries in the grocery store are usually in pristine condition. But in the field, growers must be vigilant against disease to keep them that way.

Anthracnose, a fungal disease, creates sunken lesions on fruit with spores in a pink slimy mass. And gray mold, which looks as bad as it sounds, is a constant concern.

“We’ve been able to test almost every conventional, organic and safe product for the growers,” said Kerik Cox, associate professor in plant pathology and plant-microbe biology. “Sometimes these products are expensive, and sometimes companies promote them in a way that sounds awesome and fantastic, but they often require experience and optimization to work well in New York’s wet, temperate climate.”

Cox is also working with Carroll to develop forecasting models for plant diseases and pests, based on daily readings of temperature and precipitation at weather stations throughout the Northeast. The models will alert growers to when and what they need to spray, for example.

He’s also collaborating with Marvin Pritts, a professor in the Horticulture Section of the School of Integrative Plant Science, to study how berry plants grow under the cover of tunnels – plastic hoop houses that can be moved to cover parts of a farm field.

“Once you get the rain off, disease pressure automatically eases,” Cox said. “And when you combine cover with disease forecasting, you really can get little to no impact on the environment. It’s more organic, cheaper for growers and more desirable to consumers.”

The average size of a berry farm in New York state is just 5 acres, according to a grower survey by Cornell’s berry team. Even 5 acres can translate into big value when it comes to berries.

“Strawberries produce 15,000 pounds per acre, and a grower can sell a pound for $3,” Pritts said. “Growers don’t need a whole lot of acreage to make a lot of money.”

He said most produce buyers for grocery chains aren’t interested in buying local strawberries if they can only get them for three weeks out of the year. “Extending the berry season means more opportunity for profit for growers in New York,” he said.

Just in the last five years, Pritts has started looking at growing strawberries under low tunnels, and the results have been stunning. While traditional strawberries grown in New York bloom only through June, some varieties grown under tunnels are producing fruit through November.

Raspberries, which are delicate and mold easily in the open, grow taller in high tunnels, are more productive and see little to no mold. Blackberry plants, which typically can’t survive cold Northeastern winters, can be overwintered under tunnels, and produce fruit again the next year.

Tunnels aren’t the perfect solution, though: While they reduce pressure from many pests and pathogens, they seem to provide an ideal habitat for spider mites, a pest that penetrates plant leaves and sucks out liquid, interfering with photosynthesis.

Predatory mites, which feed on spider mites, are already in common use in greenhouses. Loeb is working with Pritts to develop recommendations for releasing those predatory mites in the tunnels and establishing sustained populations.

As growers look to extend their berry seasons, many have turned to “day-neutral” strawberry varieties – plants that produce throughout the summer and fall. However, most of the commercially grown day-neutral berries in New York were bred for use in California and its vastly different climate.

Courtney Weber, associate professor in the Horticulture Section of SIPS, is working to develop varieties that combine the best traits of New York and California berries.

“The varieties developed for California wintertime production were bred to be firm and hardy, so they can tolerate being shipped across the country,” Weber said. “Our New York berries are a little softer, a little juicier and more flavorful. We don’t want to lose that flavor – it’s what keeps customers coming back to the farm stand and the farmers market to buy the local product.”

Many of the California-bred varieties are also highly susceptible to leaf and soil diseases, which are even more problematic in New York’s wetter climate.

Weber’s breeding program involves taking two varieties of the same plant with genetically appealing traits (such as size or flavor), cross-pollinating them and then looking for offspring that carry on the best traits of both parents. This process starts in Weber’s greenhouses, then his fields.

The best candidates get tested for disease resistance as well as production characteristics. Eventually, the cream of the crop are sent to nurseries and farms for real-world trials. The whole process can take 10-15 years, which underscores the importance of Cornell’s and New York state’s long-standing commitment to plant breeding.

Cornell’s breeding program is one of the oldest in the country, and the berry program is the only one still standing in the Northeast.

“Cornell’s varieties are grown all over the world,” said horticulturalist Pritts. “I was in Kyrgyzstan, and people knew about our website (fruit.cornell.edu). The work we’re able to do for New York is significant, but it’s only part of the picture. People from all over come to us for information. The impact we’re able to have is really broad and wide and deep.”

Cornell AgriTech at 140: Growing a more resilient future
As agriculture and food industries move further into the 21st century, there are plenty of tough decisions and uncertainty ahead. But these industries, and Cornell AgriTech, have been here together before. In its 140 years, the station has...
END_OF_DOCUMENT_TOKEN_TO_BE_REPLACED