As director and head curator of the Cornell University Insect Collection, Corrie Moreau has numerous tasks on her to-do list, including one that could last her entire career: digitizing the collection’s 7 million specimens.

Digitization is a national trend, supported by the National Science Foundation, to eventually link biological collections across the country through a network of searchable databases, making species data available on exponential scales from the comfort of a scientist’s office.

Cornell’s collection, established in 1871, boasts 200,000 species (about 25% of all insect species), making it the seventh-largest in the world and the biggest at a land-grant university. Its strengths include lepidoptera (butterflies and moths); dragon flies, including some of the oldest specimens ever collected; and a growing ant collection.

Moreau, the Martha N. and John C. Moser Professor of Arthropod Biosystematics and Biodiversity, was hired in 2019 in part to unlock the potential in the Cornell collection by ensuring that scientists the world over can access its resources.

“Our large historical collection not only contains specimens from 150 to 200 years ago, it has been constantly added to, up to the present,” Moreau says. “This gives us powerful tools to ask questions about how species evolved, how they change and what are the impacts from the environment and humans.”

An ant expert, Moreau has spent her career working in natural history collections – as an undergraduate and master’s student at San Francisco State University, a doctoral student at Harvard University, a postdoctoral researcher at the University of California, Berkeley, and in her previous faculty position as director of the Integrative Research Center at the Field Museum of Natural History in Chicago. Her own research unites genomic DNA and microbiology to get a richer picture of how ants have been so evolutionary and ecologically successful.

“Our large historical collection not only contains specimens from 150 to 200 years ago, it has been constantly added to, up to the present,” Moreau says. “This gives us powerful tools to ask questions about how species evolved, how they change and what are the impacts from the environment and humans.”

When the Cornell University Insect Collection was established.

Species to-date in the collection.

Largest insect collection in the world.

“I was so attracted to studying ants because they’re social; we can actually watch how they’re interacting with one another in real time,” she says. “We can make hypotheses about how broader behaviors or interactions have evolved or [ask] what is their function.”

The insect collection she inherited from former curator Jim Liebherr, an entomology professor, had been extremely well cared for, she says. Past curators have kept the collection relevant by continually adding material and maintaining each specimen’s physical condition.

Holdings include late Cornell literature professor and author Vladimir Nabokov’s collection of “blues” – a group of blue butterflies he collected and wrote about in scientific papers – and specimens he netted while driving across the country as he wrote his 1955 novel, “Lolita.”

The collection also houses a giant Atlas moth, which has the largest insect wingspan (up to 12 inches); the titan beetle, one of the bulkiest of all insects (up to 6.5 inches in length); and giant stick insects (up to 20 inches long).

Cornell has one of the best “type” collections in the U.S., Moreau says. A type is an individual specimen that contains all the characteristics that represent a species. “It’s kind of the perfect specimen,” Moreau says. Researchers use types stored in museums and collections as references when they question the taxonomy of a specimen found in the field. The Cornell collection holds 7,000 types, 2,000 of which are primary types, the physical specimen that represents the species. 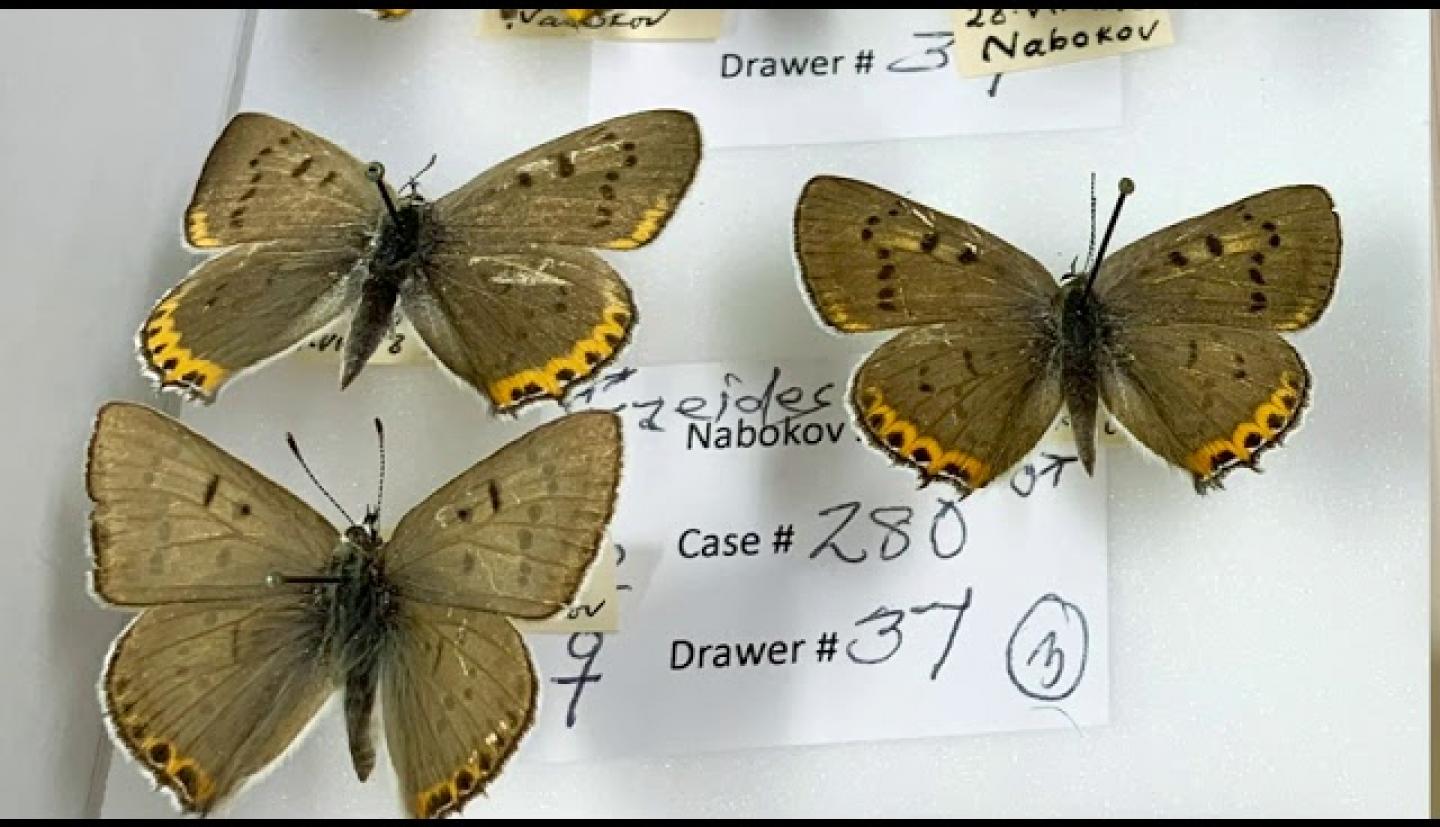 “Collections like this are so important because they give us a window into the past that we’ll never be able to replicate,” including insects that have become extinct, Moreau said.

Moreau and colleagues will use new sequencing technologies to gather genetic material from museum specimens without destroying them. In the past, scientists had to grind up an insect to sequence it, but new, nondestructive sampling techniques allow them to remove genetic material from a specimen’s innards, while leaving it externally intact so it can be returned to its pin and displayed. New techniques also allow scientists to study a museum specimen’s gut microbiome, one of Moreau’s research interests as she investigates the role of gut bacteria in an insect’s evolutionary success.

As part of the technological transition, staff will attach a scannable bar code tag next to each insect that will allow researchers to readily pull up relevant documentation, such as a specimen’s loan history, whether its DNA has been extracted and if its image has been taken.

Genetic, microbiome and taxonomic information, images and other records from the Cornell collection will be made available through a publicly available database, called the Global Biodiversity Information Facility. The data follows a standard format to make records from different biological collections sharable across different databases.

Once uploaded, species data becomes part of a network of databases, so any researcher in the world can do a search and find each collection that holds desired specimens. Scientists can do broad searches to understand how climate change may be affecting species distributions based on where specimens across many collections were found over time. They also can compare many individuals in a species to determine how evolutionary pressures may have led to variation.

With the transition to virtual museums, is there a fear that physical collections may lose relevance? Moreau thinks the opposite is true: Now, researchers might conduct an online search, then know where to go to borrow a specimen or which collection to visit for their research.

“As materials get digitized, people become aware of what’s available to study,” she says. “What we see is that as we digitize, people make use of our collections more and more.”

The 2030 Project to marshal faculty to solve climate crisis
Declaring this the “decisive decade” for climate action, Cornell launched The 2030 Project: A Climate Initiative, which will mobilize world-class faculty to develop and accelerate tangible solutions to the climate challenge.
END_OF_DOCUMENT_TOKEN_TO_BE_REPLACED