|
By Blaine Friedlander
Share
Despite important agricultural advancements to feed the world in the last 60 years, a Cornell-led study shows that global farming productivity is 21% lower than it could have been without climate change. This is the equivalent of losing about seven years of farm productivity increases since the 1960s.

The future potential impacts of climate change on global crop production has been quantified in many scientific reports, but the historic influence of anthropogenic climate change on the agricultural sector had yet to be modeled.

The scientists and economists developed an all-encompassing econometric model linking year-to-year changes in weather and productivity measures with output from the latest climate models over six decades to quantify the effect of recent human-caused climate change on what economists call “total factor productivity,” a measure capturing overall productivity of the agricultural sector. 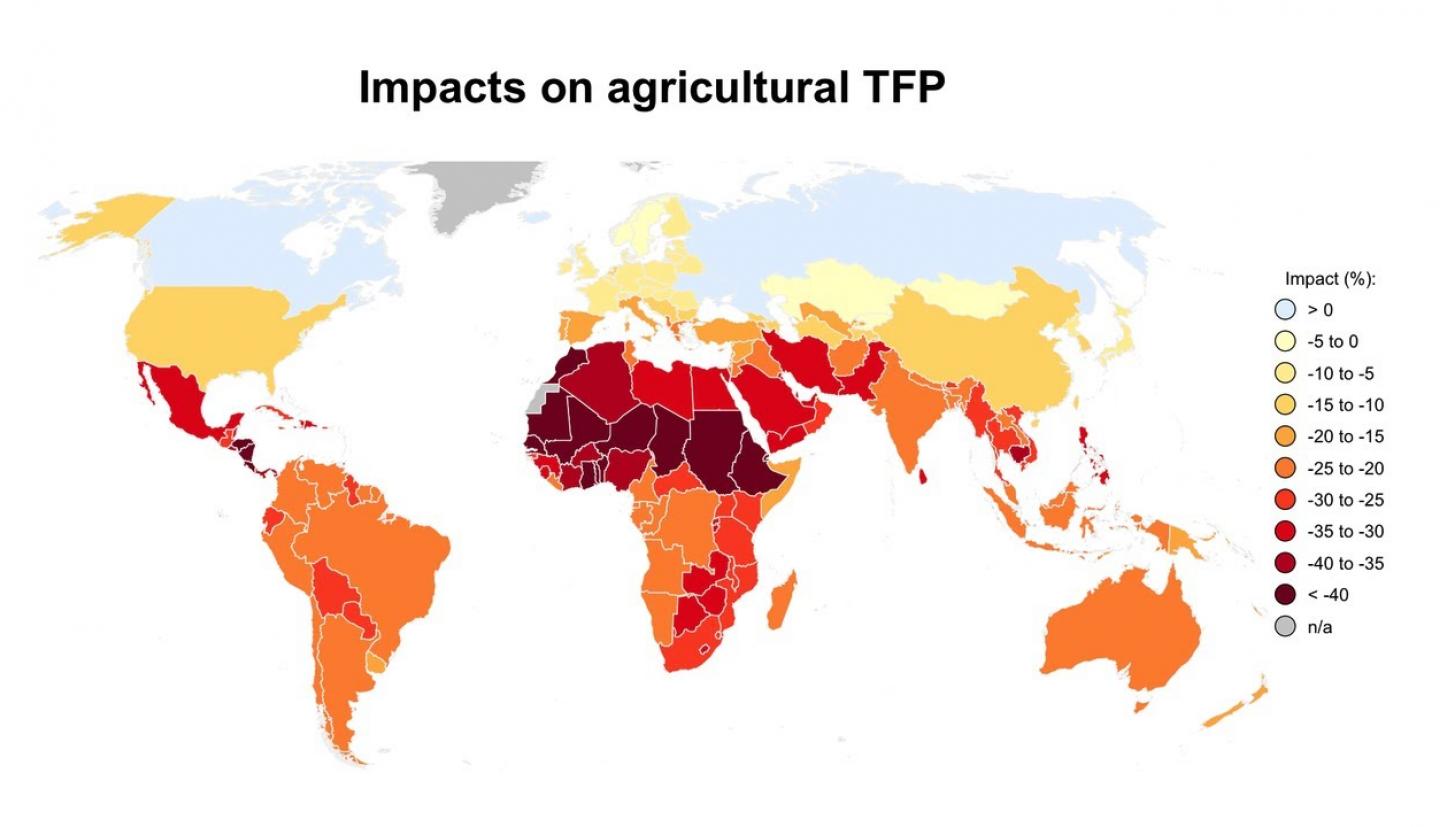 Ortiz-Bobea said they considered more than 200 systematic variations of the econometric model, and the results remained largely consistent. “When we zoom into different parts of the world, we find that the historical impacts of climate change have been larger in areas already warmer, including parts of Africa, Latin America and Asia,” he said.

Humans have already altered the climate system, Ortiz-Bobea said, as climate science indicates the globe is about 1 degree Celsius warmer than without atmospheric greenhouse gases.

“Most people perceive climate change as a distant problem,” Ortiz-Bobea said. “But this is something that is already having an effect. We have to address climate change now so that we can avoid further damage for future generations.”

Ortiz-Bobea and Robert G. Chambers, professor of production economics at the University of Maryland, have been pioneering new productivity calculations in agriculture to include weather data that has not been addressed historically, aiming to bring new accuracy to climate models.

“Productivity is essentially a calculation of your inputs compared to your outputs, and in most industries, the only way to get growth is with new inputs,” Chambers said. “Agricultural productivity measurement hasn’t historically incorporated weather data, but we want to see the trends for these inputs that are out of the farmer’s control.”

David Lobell, professor of earth system science at Stanford, said that the results show clearly that adaption efforts must look at the whole supply chain, including labor and livestock. “They also show that even as agriculture becomes more mechanized and sophisticated, the sensitivity to weather does not go away,” he said. “This is counter-intuitive for most people, and we need a deeper understanding of why.”

“My sense is that we are just getting better at eliminating all the non-weather constraints on production, but we need to scrutinize various possible explanations,” said Lobell, who examines the impact of climate change on crop production and food security.

“This study is a big leap beyond the traditional focus on a few major grain crops,” he said. “By looking at the whole system – the animals, the workers, the specialty crops – we can see that the entire agricultural economy is quite sensitive to weather. It seems that in agriculture, practically everything gets harder when it’s hotter.”

In addition to Ortiz-Bobea, Chambers and Lobell, the co-authors are Toby R. Ault, professor of earth and atmospheric sciences in the College of Agriculture and Life Sciences; and Carlos M. Carrillo, research associate in the Department of Earth and Atmospheric Science.

Cornell funding was provided by USDA National Institute of Food and Agriculture and the National Science Foundation.

Ortiz-Bobea and Ault are fellows in the Cornell Atkinson Center for Sustainability.

Advanced microscopy shines light on new CRISPR-Cas system
Eventually, these findings could lead to a reliable CRISPR-Cas system that allows scientists to insert larger cargoes of genetic information into cells with more precision than current techniques allow, with far-reaching implications for...