|
By R.J. Anderson
Share
Five-year-old Olivia Rivera-Warr had a question for her mother as they were walking through their inner-city neighborhood in Rochester, New York, two years ago: “Mommy, why is our street so icky?”

Her mother, Lydia Rivera-Warr, was taken aback by her child’s observation. “But she was right,” says Rivera-Warr. “Back then, not only was Emerson Street strewn with litter, it was a place where drugs were sold openly and prostitutes hung around the dealers.

“When I realized how much the situation was affecting her, I knew had to do something about it for her and the other kids on the street,” she recalls.

That’s when Rivera reached out to Kathy Lewis, a master gardener volunteer with Cornell Cooperative Extension (CCE) of Monroe County.

Lewis leads a Rochester inner-city community beautification initiative called Blocks in Bloom. The idea is that by teaching residents in low-income neighborhoods how to develop and maintain a front yard flower garden, something much bigger will grow.

The gardens are designed to come back year after year, by using perennial plants such as shasta daisies, black-eyed Susans, hostas and ferns donated by Rochester home centers and garden clubs as well as compost and mulch provided by the city of Rochester. Advice on how to plant and care for the plants is given by the 20 or so master gardener volunteers working with the program. 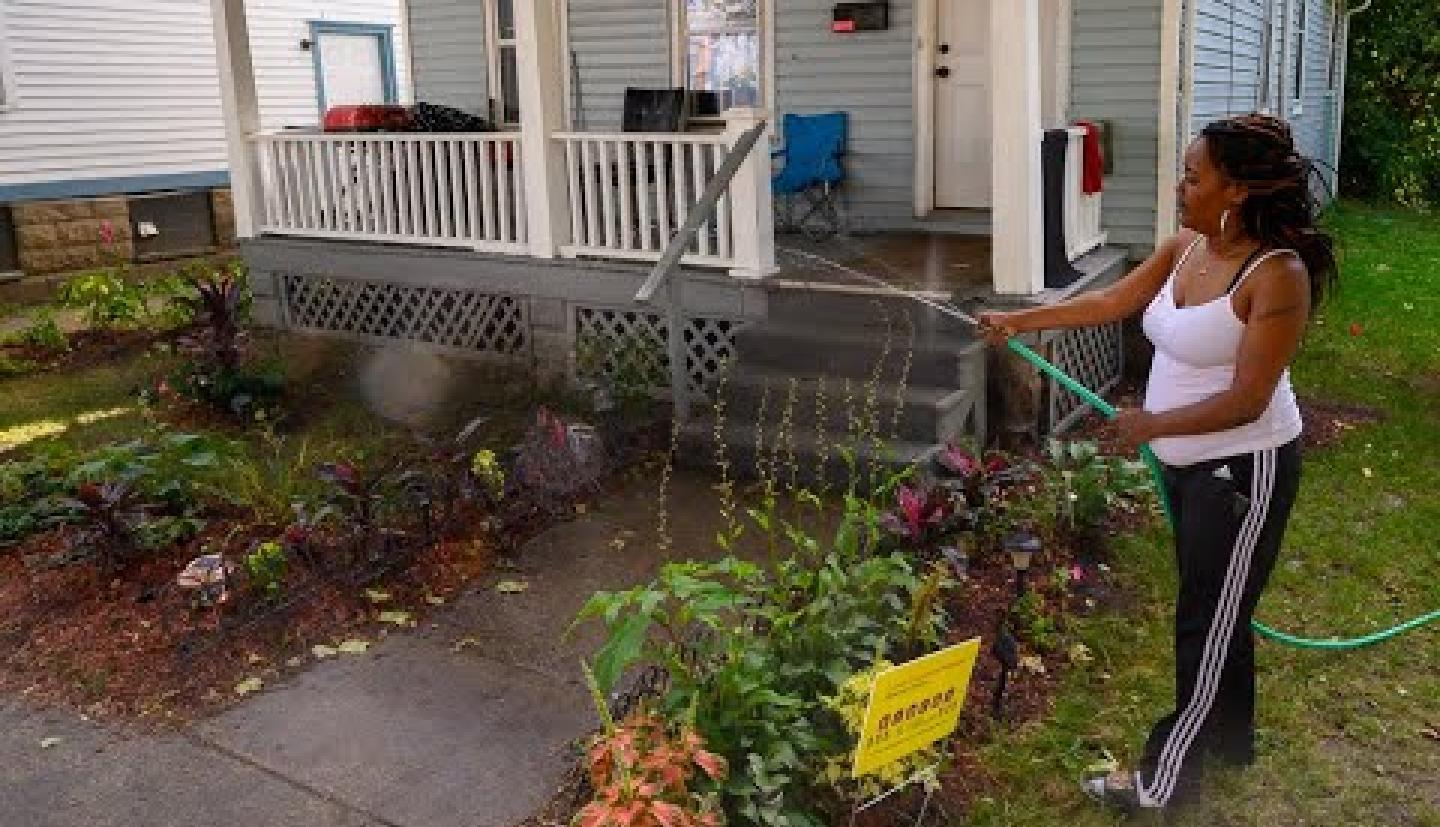 Housed in CCE county extension offices across New York, the Master Gardener Program is fueled by CCE-trained volunteers who provide research-based support to the public. In Monroe County, there are about 100 CCE master gardeners donating time and expertise.

“Part of CCE’s local mandate is improving home and community landscapes as well as strengthening families and promoting health and well-being,” says Andrea Lista, executive director of CCE-Monroe County. “That is exactly what the Blocks in Bloom program does.”

Lewis estimated that the initial costs of planting these types of flower gardens would typically be upward of $150 to $200 per house, too expensive for most residents, especially renters, she said. CCE offsets that cost by securing donated plants and tools from area garden centers and neighborhood partners like the city of Rochester.

What began as a pilot project in 2014 with two blocks has grown to serve 15 blocks per year in Rochester. To participate, a block must have a minimum of six households sign up. But there is no limit to how many can take part; some blocks have had as many as 30 households in the program. Since its inception, Blocks in Bloom has covered 71 blocks, reaching 665 households.

“The goal is to help residents of low-income neighborhoods organize and work together to make their block a more beautiful and a stronger place using gardening as a tool,” says Lewis, who started the program. “The key to getting community buy-in is finding that one person on a block to be the champion who steps forward and leads the organizing efforts. Those are our block captains.”

Rivera-Warr, a single mother of two and a small business owner working two jobs, started as a block captain on Emerson Street in the spring of 2017, despite having just moved there and never having grown a plant or a flower. She began by picking up litter and talking to her neighbors about their shared desire to create a safer, more desirable place to live. That year, she signed up 18 households – mostly renters.

“At first I was out recruiting the grown-ups, but soon the kids started tagging along, taking interest in it,” Rivera-Warr says. “When the plants arrived and hard work of breaking the ground up and getting the flower beds ready began, that’s when the kids really stepped up and started helping.”

“I call Lydia the Pied Piper of Emerson Street,” Lewis says. “Every time you saw her, there was a swarm of kids around her helping her with a project.”

For Rivera-Warr, the motivation for Blocks in Bloom starts and ends with the kids.

“Walk down the street with a kid and they will say things like, ‘I planted that flower’ or ‘This lot used to be dirty and now it’s clean,’” Rivera-Warr says. “They’ve developed a real sense of pride in our neighborhood and what they’ve accomplished – that alone would be a tremendous outcome.”

Today Rivera-Warr is vice president of the Edgerton Neighborhood Association, which includes Emerson Street. She’s also one of nine block captains who trained to become block mentors this past spring. They now share their experiences, enthusiasm and help support blocks that are new to the program.

As Rivera-Warr’s role has grown, so has the green in her thumb. “My garden has lilies, salvia, lavender, black-eyed Susans and yellow drops,” she says. “This year, I even grew tomatoes.”

Calling CCE’s Blocks in Blooms program a foundation for change in her neighborhood, Rivera-Warr says working side by side with her neighbors has created a more welcoming, connected and safer community.

“People are actually outside hanging out and talking to each other because relationships have been built and the spaces are so much more inviting,” she says. “As a result, we’re looking out for one another and calling the police when we see something that doesn’t look right.

“Crime hasn’t completely disappeared,” she continued, “but it’s much better than it used to be – it feels lot safer. And my kids are proud of where they live.”

In an international, multi-institutional effort, Cornell’s Food Science Department will research how to increase iron and zinc absorption, thanks to a Bill &amp;amp; Melinda Gates Foundation grant.

More than 300 faculty, staff and students from Cornell and the new Cornell Global Hubs gathered Nov. 16-17 to discuss ideas for the next universitywide Global Grand Challenge.