|
By Joseph Opoku Gakpo
Share
For a brief moment, Hale Ann Tufan asked the hundreds gathered in the stately Hall of Laureates at the World Food Prize to close their eyes and conjure in their minds the image of a farmer.

For those from the United States, the mental image may be an older white man standing next to a gleaming new tractor beside a 1,000 acre field rippling with golden wheat.  But in many other parts of the world, the reality of farming is much different. Smallholder farmers in Africa and Asia are women and men tending small plots of less than acre, and have limited access to equipment, fertilizers and markets.

“This first instinctive mental impression is revealing of our personal position, our norms, stereotypes, biases and beliefs,” Tufan said from the stage after accepting the 2019 Norman E. Borlaug Award for Field Research and Application. “Whether we realize it or not, these play into everything we do,” she added.

Borlaug, the father of Green Revolution and Nobel Peace Prize laureate, helped establish the World Food Prize in 1987 to honor individuals for outstanding achievements confronting food insecurity. Since 2012, a separate category — the Norman E. Borlaug Award for Field Research and Application — recognizes exceptional science-based achievements in international agriculture and food production by individuals under the age of 40.

The World Food Prize Foundation praised Tufan’s work championing gender within the global agricultural research community, and lauded her efforts to ensure women farmers and scientists are fairly represented in the lab, in the field and at the table. She is co-director of the Gender-responsive Researchers Equipped for Agricultural Transformation (GREAT) project, and works with the NextGen Cassava Breeding project on the Gender Responsive Cassava Breeding initiative which targets female farmers in Africa.

“Gender determines what a farmer has the right to access: land, labor, inputs, information, credit, technology, markets, machinery and much, much more,” Tufan said at the ceremony. “Women and girls face systematic barriers to owning and managing farms, yet they tend to fields planted with varieties whose development they had no power to influence.

“We may continue producing varieties that won’t get adopted, or miss our poverty alleviation goals if genetic gains don’t translate into equity gains for women and girls,” she said. 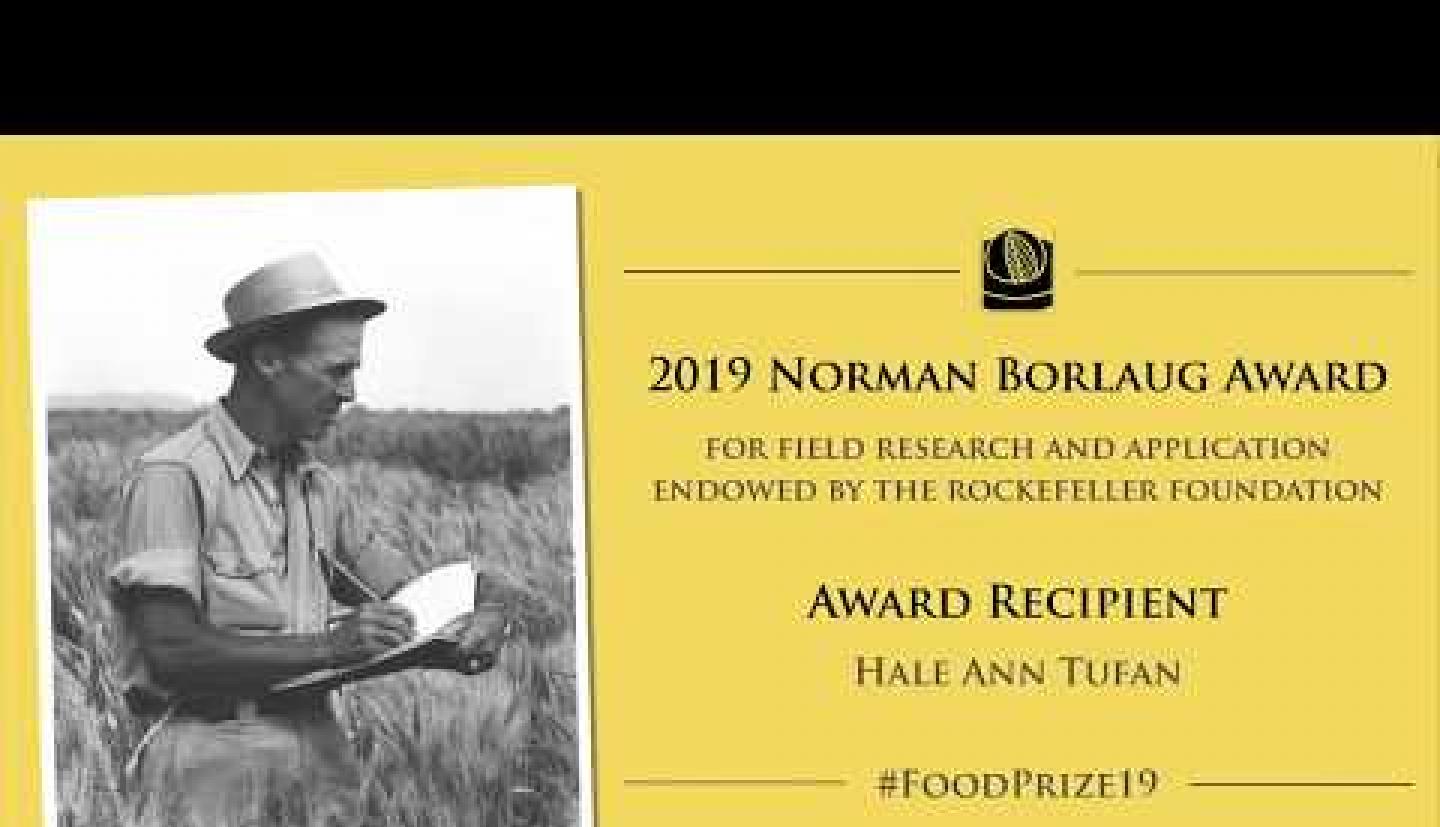 World Food Prize Foundation president Kenneth Quinn said it was fitting for Tufan to be recognized Oct. 16 on UN World Food Day. "Given Norman Borlaug’s commitment to uplifting poor smallholder farmers, the majority of whom are women, it was most fitting that Dr. Hale Ann Tufan received the Borlaug Field Award,” he said, praising “her exceptional achievements in promoting gender sensitive agricultural programs.”

Tufan’s efforts are inspiring young women who identify with the challenges she is helping to address. As a young farmer just starting out in Zimbabwe, Ruramiso Mashumba struggled to obtain bank loans for her farm because she is a woman. Banks told her she was too high risk because farming is viewed mainly as a man’s job — a questionable claim since women are just as involved in farming as men.

Mashumba, now the national chairperson of the Zimbabwe Farmers Union’s youth wing, said she faced numerous obstacles to success as a woman farmer. She founded Mnandi Africa to promote food security and encourage women in farming.

“For me, Hale’s award shows that the work I do in supporting women in agriculture is very important, and it inspires me to want to do more of it,” Mashumba said. “She could have chosen to focus her work on anything else, but she chose gender, and we are all grateful.”

"Despite agriculture’s transformational advances, there is still so much that must be done to represent and meet women farmers’ distinctive needs,” Barchette said. “Professor Tufan’s work encourages me as a student and development researcher to adopt a spirit of collaboration, openness and thoughtful consideration of every stakeholder."

Seminar to explore racial and food justice movements in New York
The seminar “A Pig and a Garden: Fannie Lou Hamer, Agricultural Cooperatives and the Black Freedom Movement” will be led by Monica White, associate professor of environmental justice at the University of Wisconsin-Madison. In her talk White will...

On April 15–16, scholars, activists and practitioners from around the world will meet to explore plantations’ deep-rooted legacies – including racial inequality, dispossession and climate change – in a Conversation on the Plantationocene.