|
By David Nutt
Share
Prohibiting fishing in conservation reserves is a common strategy for protecting ocean ecosystems and enhancing fisheries management. However, such dedicated reserves are rare in freshwater ecosystems, where conservation efforts generally piggyback on the protection of terrestrial habitats and species.

Now, a collaboration between researchers from Cornell and the University of Wisconsin-Madison has found that small, community-based reserves in Thailand’s Salween River Basin are serving as critical refuges for fish diversity in a region whose subsistence fisheries have suffered from decades of overharvesting.

The lead author is Aaron Koning, a former postdoctoral fellow with the Cornell Atkinson Center for Sustainability who is currently a postdoctoral researcher at the University of Nevada, Reno. The project was overseen by Pete McIntyre, the Dwight Webster Sesquicentennial Faculty Fellow and associate professor of natural resources and environment in the College of Agriculture and Life Sciences.

Freshwater ecosystems across the world have experienced rapid species declines compared to ecosystems on land or in the ocean. One of the leading causes is overfishing, particularly in regions where fish are a vital source of human nutrition.

Community members spearfish in the Mae Ngao River just outside of a conservation reserve. Photo provided

Koning launched his work in Thailand as a doctoral student with McIntyre at the University of Wisconsin-Madison, with the goal of testing whether the benefits documented from marine conservation reserves might also apply to freshwater systems. Both researchers came to Cornell in 2018 and continued to work on the project with their collaborators at UW-Madison.

They focused on the Mae Ngao River along Thailand’s border with Myanmar, because Southeast Asia has an unusually long history of freshwater conservation reserves. In 2012, Koning began documenting more than 50 reserves spread over 1,000 square kilometers of the river valley. Each of these reserves had been created by a local community to support its own nearby fishing grounds.

“It was really striking to see this largely uncoordinated effort of grassroots actors who pursued this fascinating conservation strategy of their own volition, and they keep doing it because they can see the benefits in their catches,” Koning said. “That really motivated me to ask the questions: Why does this work and could it work elsewhere?”

The researchers surveyed fish communities in 23 separate reserves that ranged in length from 300 meters to 2 kilometers. Compared to adjacent areas where fishing is unrestricted and intense, the grassroots reserves contained on average 27% more fish species and 124% higher fish density, with a more than twentyfold increase in overall biomass. 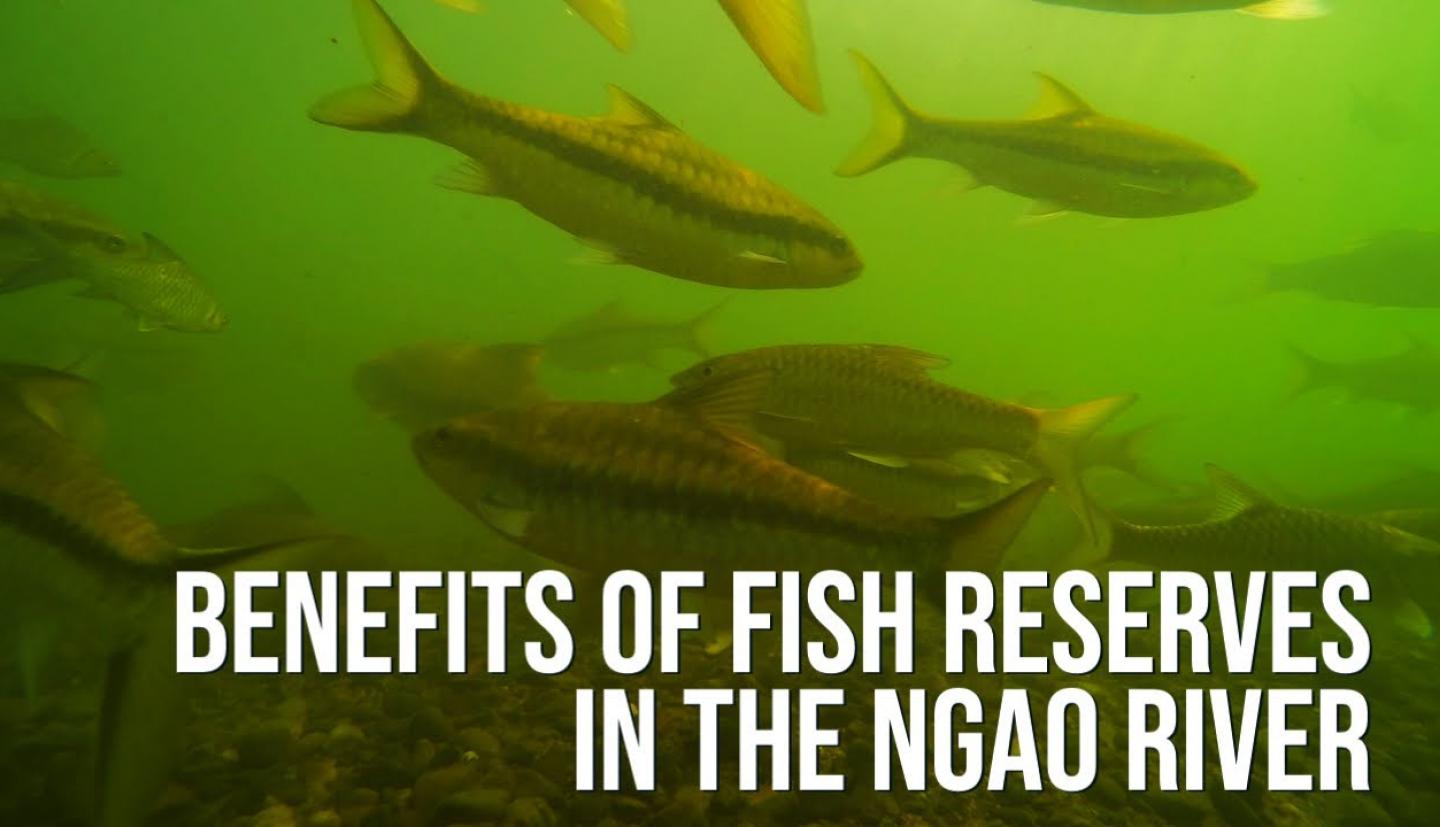 Play Benefits of Fish Reserves in the Ngao River

“Generally, we think of rivers as systems where things flow through and fish move around constantly, so what effect could a small reserve possibly have?” Koning said. “But just having a few hundred meters where people aren’t fishing, while they’re fishing like crazy everywhere else, can consistently produce these big changes.”

One of the key characteristics for successful reserves was location. When reserves are placed within view of local villages, the community members can enforce conservation rules and deter poachers.

Fish longer than 20 centimeters (approximately 8 inches) were almost entirely restricted to the reserves, and larger reserves saw the biggest bump in fish diversity and size. Community members reported that having the reserves over time helped them to catch larger fish. This indicates the reserves not only protect biodiversity but can also bolster the food security of local populations, especially during the dry season when farmers have collected their crops and turn to subsistence fishing to supplement their families’ diets.

“As if the local benefits were not amazing enough, we were fascinated to see a further benefit of having other reserves nearby. These fish populations appear to be linked, yielding synergistic gains when the ad hoc network of reserves allows exchange among protected areas,” McIntyre said.

The team’s findings aligned with the theoretical predictions made by marine conservation models, which led the researchers to suspect the grassroots reserves could be a successful strategy for other regions that have been overharvested, such as in the Mekong, Amazon and Congo rivers, where intensive fisheries feed millions of people.

“This is a great example of communities engaging in conservation on their own, and being successful,” Koning said. “If we can take that reality, mix it with what we already know from marine systems, then maybe we can marry these things and design a system of small reserves that maximize conservation benefits while improving fishery benefits for communities, too.”

Koning is now working with Zeb Hogan, an aquatic ecologist at the University of Nevada-Reno who hosts the National Geographic network program “Monster Fish,” to study this conservation approach at larger scales in the Mekong River basin.

The research was supported by the National Science Foundation, the Mustard Seed Foundation, and the David and Lucile Packard Foundation, in addition to the Cornell Atkinson Center for Sustainability.

Applications open for $3M Grow-NY competition
In its four years, the competition has received applications and interest from more than 1,000 businesses in 32 states and 37 countries. In all, 59 finalists have been selected to date, with 21 winners sharing $9 million in startup funding as well as mentorship and networking benefits.

The 2030 Project to marshal faculty to solve climate crisis
Declaring this the “decisive decade” for climate action, Cornell launched The 2030 Project: A Climate Initiative, which will mobilize world-class faculty to develop and accelerate tangible solutions to the climate challenge.
END_OF_DOCUMENT_TOKEN_TO_BE_REPLACED