“Sheep will rest in the shade of a solar panel just as well as under a tree; they don’t care,” said Hain, a farmer in the Finger Lakes region and executive director of the American Solar Grazing Association, a nonprofit trade group that connects solar companies with shepherds.

Now a Cornell researcher is partnering with farmers, solar companies and the association to explore the economic benefits of a business cooperative or producer-owned organization that could provide coordination and logistical services for farmers grazing under solar arrays. Todd Schmit, associate professor in the Charles H. Dyson School of Applied Economics and Management and faculty director of Cornell’s Cooperative Enterprise Program, is leading a three-year, $500,000 project, funded equally by Cornell and the U.S. Department of Agriculture. 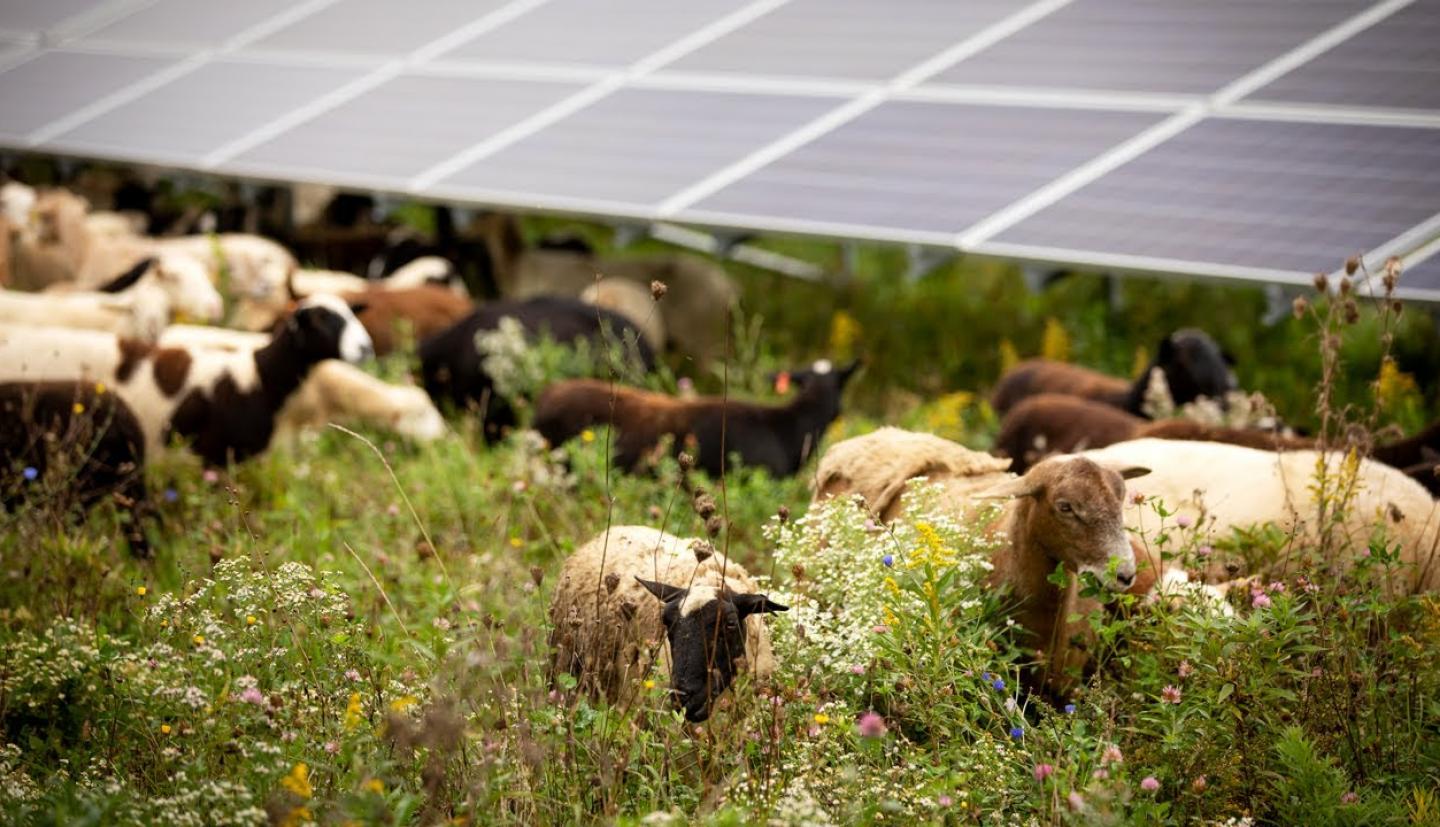 “This idea complements the goals of reducing fossil fuel use in New York state and throughout the Northeast,” Schmit said. “There are literally thousands of acres going under new solar production, and I think increasing renewable energy production is a great thing, but it’s a little ironic if we’re promoting renewable energy production and then, because we need to control the vegetation, we’re going out there with mowers that are using fossil fuels or spraying it with pesticides that are killing the plants.”

Hain sees this as a boon for shepherds.

“The farm businesses that have gotten these solar grazing contracts have expanded rapidly; oftentimes, they enable farmers to access land and a key new revenue source at once,” she said. “Most farmers have to try to balance a lopsided income, where you’re paying bills year-round but maybe only earning income a few times a year. These checks from the solar companies are a stable source of revenue, and they really help.”

Hain said part of the challenge is coordinating between a few large multinational solar companies and many small farmers. Of the roughly 2,000 sheep farms currently operating in New York state, only 39 report having more than 300 sheep.

Schmit believes this problem could be solved by helping farmers create a producer-owned business cooperative that could negotiate contracts and share transportation equipment. Beyond grazing, the project also will explore potential benefits of farmers collectively producing and marketing lamb, including sharing processing equipment and creating a value-added brand for marketing “sheep produced under solar arrays.”

More than half of the lamb and mutton consumed in the U.S. is imported from New Zealand and Australia, so providing more market opportunities for local shepherds would benefit the New York economy, and reduce the carbon footprint of sheep products consumed here.

While Schmit’s project will focus on New York, Pennsylvania and the New England states, he hopes lessons learned from the project will be useful to sheep farmers throughout the United States.

Before business and financial planning research can begin, Schmit said he will be meeting and collaborating with farmers across the Northeast to share ideas and information. Roberta Severson, executive director of the Cornell Cooperative Enterprise Program in Dyson, will take the lead in those outreach efforts.

“Coming to consensus among a potentially disparate group of farmers about their needs and goals for collective action is the first step to new cooperative development, and without it the enterprise cannot move forward,” Schmit said. “As an economist, I think there’s a real opportunity for expansion of the industry, and an opportunity to bring new farmers into production agriculture.”

Krisy Gashler is a writer for the College of Agriculture and Life Sciences.

Art and exhibits illustrate hope for climate resilience
Art, sculpture, photos, and prints bring research on climate adaptation and resiliency to life at Cornell Botanic Gardens' Nevin Welcome Center. The exhibits illustrate the value and impact of a collaborative project with faculty and indigenous farmers, fishers, herders, hunters, and orchardists across the globe.