Can rice be grown in New York's climate?

|
By Krishna Ramanujan
Share
In 2013, Nfamara Badjie and his wife, Dawn Hoyte, bought a 6-acre farm in Ulster Park, New York, in the Hudson Valley. They soon realized the fields were muddy – almost wetlands – but Badjie didn’t mind.

“I said, ‘That’s the one I’m looking for, the wetland is good for the rice,’” Badjie said, flashing an easy smile. “Dawn said, ‘No, you can’t grow rice here. Are you crazy?’”

Few farmers attempt to grow a warmth-loving crop like rice in the Northeast’s short growing season, but Badjie and Hoyte are experimenting with rice-growing methods to suit New York’s climate on their Ever-Growing Family Farm. It’s the only commercial rice farm in New York state, and one of a handful of small rice farms in the entire Northeast.

Badjie is guided by generations of farming experience. Before moving to the United States in 2005, he had spent his whole life in rice fields in the Gambia, West Africa. He belongs to the Jola people, from the Gambia, Senegal and Guinea Bissau, who have been farming rice for 1,000 years. Now Badjie, Hoyte and Moustapha Diedhou, a Jola farmer from Senegal, are successfully building their rice farm, and a Cornell agronomist is helping them optimize their crop.

The collaboration may improve farmers’ commercial success, provide a roadmap for future rice growers, and create a local market for fresh rice – which cooks and tastes different from aged rice – as a boutique, specialty grain. And rice grown in the Northeast may provide a valuable alternative for organic farmers looking to diversify their crops in the face of climate change, as trends of warmer temperatures and increased precipitation continue in the Northeast. Data from 1957 to 2010 from the Northeast Regional Climate Center for Rosendale, New York (the best data near Ulster Park), reveals a consistent trend of increased annual rainfall; the center reported an average of 9.1 more inches of rain in 2010 than in 1957.

“Rice can be part of a new cultural and ecological landscape that adapts to climate change in New York, which makes a lot of sense in so many ways,” said rice scientist and agronomist Erika Styger, associate director of Cornell’s Climate-Resilient Farming Systems program.

Styger – who has worked with rice farmers in West Africa for 12 years – teamed up with the Ever-Growing Family Farm as the technical adviser on a $14,000 Northeast Sustainable Agriculture Research and Education (SARE) Farmer Grant last spring. She is an expert in the System of Rice Intensification (SRI), an agro-ecological method for increasing the productivity of rice by changing the management of plants, soil, water and nutrients. Together Styger and the farmers designed a field experiment testing how an African rice variety called Ceenowa fares in the Hudson Valley climate when reared in traditional Jola rice nurseries and grown with SRI methods and staggered transplant timings.

“The main aim of the grant is to study different ways of crop establishment,” Styger said,“ so the system can become more flexible, less risky, cheaper, guarantee a harvest or even improve the harvest, and diversify the options so farmers can test and see what works for them.” 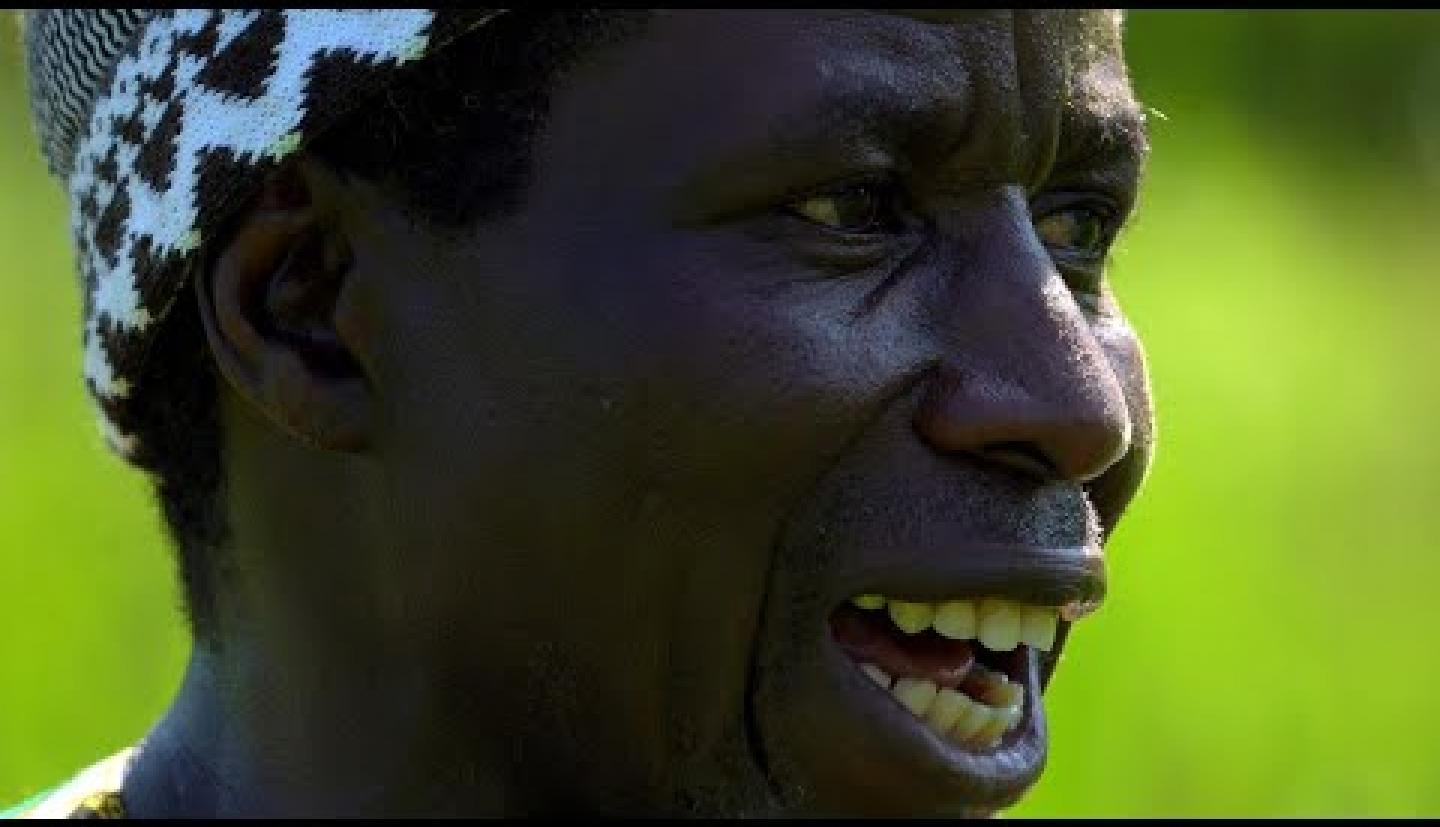 Returning to their roots

After buying the land, Badjie, his three sons, Malick, 27, Modou, 18, Abibou, 15, and Diedhou labored to create a farm. They cleared brush and dug out paddies, all by hand. It can take Malick Badjie two to four weeks, depending on size, to dig and level a paddy. He digs with a traditional Jola tool called a kajundu, a cross between a spade and a shovel attached to a 12-foot pole. Diedhou had brought the specially crafted blade from Senegal in a suitcase.

“If you don’t know how to use the tool, they say you [can’t keep] a wife; people think you are lazy,” Diedhou said.

With paddies in place, they struggled with a nursery method they had adopted for growing seedlings and the timing of transplants in the Hudson Valley climate. They soaked seeds and started growing them in trays in a hoop house, then transplanted month-old seedlings into paddies after the last frost. But the spindly seedlings turned yellow in the trays, and the fragile roots bunched up and broke when transplanted, shocking the plant and slowing its development.

Hoyte and Badjie had picked up this planting strategy, developed by Japanese farmer Takeshi Akaogi, at a meeting of the Ecological Rice Farming in the Northeastern USA network in 2014, which took place at Akaogi’s rice farm in Putney, Vermont.

Akaogi’s method tried to address a bottleneck, Styger said. “You have to time the establishment of the crop very, very well.” Plant too early, and frost kills the seedlings. Plant too late, and grains won’t be ready for harvest.

For every farmer, such techniques are a matter of trial and error. With the method not working optimally on their land, Badjie decided to return to his roots in 2018 and he tried his traditional Jola method of starting plants directly in the soil, in raised beds. They began soaking seeds later in the season, planted outdoors, covered seedlings with plastic or burlap to protect from frost, then transplanted them in paddies.

The Jola method eliminated the need for a greenhouse; the roots were healthier and could be transplanted surrounded by dirt without breaking, limiting transplant shock.

“It can save me,” Badjie said.

In all, the Jola nursery was cheaper and shortened the rice production cycle. This created flexibility.

“That was very good for me,” Badjie said. “I’m going to keep doing that.”

Added Styger: “They tested those nurseries last year, and the transplanted plants were doing much better.”

With Styger on board this spring to advise them, they integrated some best practices from the SRI system such as transplanting younger and single seedlings. The younger plants grew faster in the paddy and caught up to older plants. They combined these techniques with their Jola raised-bed nursery and together designed an experiment to quantify what they observed.

The experiment is three-pronged. First, it tests how well two types of rice grow in the local climate. Duborskian rice is a long-awned, short-grained, Ukrainian variety introduced to New England in 1983 by Christian Elwell ’69, one of the first known rice farmers in the Northeast, who was given the seeds by Cornell soil science professor John Peverly. Ceenowa is a red heirloom rice from Africa that the Jola have grown for centuries, and so far, it has grown well in the Hudson Valley climate. The only drawback is that birds love the smooth seed, so the farmers string magnetic tape from video and music cassettes across paddies, which rattles in the wind to scare off birds.

“African [Ceenowa rice] is No. 1,” Malick Badjie said. “It grows fastest and gets done first.”

Second, Styger and the farmers are comparing the Akaogi and SRI/Jola nurseries, with separate plots devoted to each. And third, they’re comparing the two varieties and nurseries with staggered planting dates. They will continue collecting data through the October harvest.

“We’re seeing … how far we can push the window of transplanting,” Hoyte said.

If the SRI/Jola method proves productive, other Northeast farmers would have another technique to try.

One thing is clear: Their product is in demand.

“It’s really popular, people love it,” Hoyte said of the fresh rice, which tastes nuttier than stored rice and cooks with less water.

They sell it by word of mouth at $8 per pound. Local restaurants have offered to buy their entire stock.

Last year, they yielded about 1,000 pounds of rice; they expect a bigger harvest this fall. With machines, they believe they could harvest up to 3,000 pounds per acre.

“Every problem is one of equipment,” Diedhou said. But they are limited by personnel and money. They have used some of the grant for a small combine and rice dryer. They plan to expand beyond the 3-plus acres they already farm, and have offers to grow rice on other people’s land.

The Ceenowa variety offers a promising niche market, especially in New York City, where many consumers would be willing to pay more for African rice produced by an African family, McCouch said.

“These are specialty rices for customers who are willing to pay for the efforts and the story behind them,” she said.

In the end, the Badjies and Diedhou cultivate the crop because it’s in their blood. It’s part of their heritage. The farmers dream of quitting their day jobs and growing rice full time.

“We want our family to know where we come from and how we live, what we were doing before we got here,” Nfamara Badjie said. “That’s what we want to show them.”