|
By Matt Hayes
As the world changes rapidly, new leaders are emerging to tackle the biggest challenges in food and agriculture.

“I have been so impressed by how many leaders are stepping forward in support of global partnerships, and how many of them are women,” she said, adding: “I’m truly energized by the next generation of leadership — those of you, all of you, who are so eager to take up the mission of eliminating hunger.”

The BGRI, based in Cornell's Department of Global Development, has been a leader in training and recognizing women scientists working in wheat. The May 21 event honored this year’s Women in Triticum (WIT) awardees, and included Stinson’s keynote address and a panel discussion with former WIT winners. The event was the first in a series of planned virtual workshops from the BGRI. 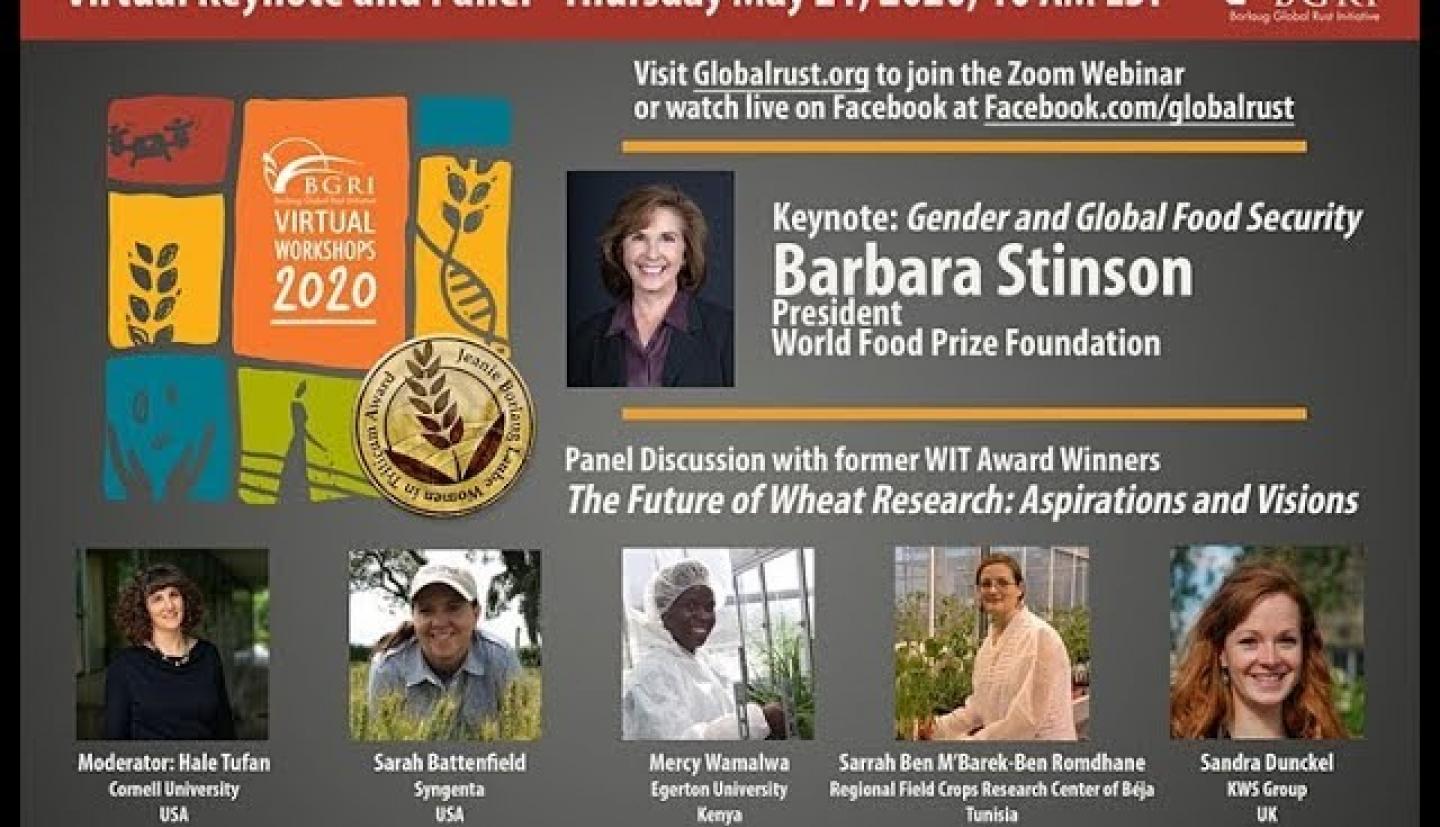 The WIT Early Career Award provides women researchers with the opportunity for additional training, mentorship, and leadership opportunities in wheat science. The WIT Mentor Award recognizes the efforts of men and women who have positively shaped the careers of women working in wheat and demonstrated a commitment to increasing gender parity in agriculture.

Maricelis Acevedo, associate director for science for the Delivering Genetic Gain in Wheat (DGGW) project (and herself a 2010 WIT winner), noted that this year’s awardees work across a multidisciplinary span of wheat science, from wheat breeding and pathology, to surveillance, data science and extension, with many disciplines in between.

“The future of wheat science — in fact, the future of the world itself — depends on the work of innovative, enthusiastic researchers,” Acevedo said.

Since 2010, the BGRI has honored 55 women scientists with early-career awards. The mentor award has gone to 10 individuals since it was established in 2011.

Anna Elizabeth Backhaus, from Germany, is a second-year Ph.D. student at the John Innes Centre in the United Kingdom. Her work focuses on the genetic network in control of early spike development in wheat. She has also worked at the Max Planck Institute.

Bharati Pandey, from India, is a scientific officer in the Bioscience Group, Bhabha Atomic Research Centre, in Mumbai. Pandey has helped design and develop an Indian wheat database which allows researchers to retrieve information about molecular markers linked to rust-resistance genes.

Yewubdar Ishetu Shewaye, from Ethiopia, works as a wheat breeder for the Ethiopian Institute of Agricultural Research. Her main objectives are to empower the farming community in developing nations in the fight against wheat rust diseases, to reduce production costs for resource-poor farmers and to increase yield.

Paula Silva, from Uruguay, leads part of the disease resistance breeding program at INIA as well as coordinates the Precision Wheat Phenotypic Platform for Wheat Diseases in collaboration with CIMMYT. She has worked on projects aimed at breeding for barley yellow dwarf and blast resistance.

Peipei Zhang, from China, is a researcher at Hebei Agricultural University. For the last decade, her research has focused on wheat rust genetics, specifically on gene discovery and leaf rust resistance in the wheat genome.

Evans Lagudah, chief research scientist at CSIRO, Australia, is a fellow of the Australian Academy of Science and an adjunct professor at the University of Sydney. Lagudah’s research is aimed at the rapid translation of new molecular discoveries into practical agriculture in the global grains industry.

Sarah Evanega spoke about launching the WIT awards during her time leading the Durable Rust Resistance in Wheat (DRRW) project from 2008-2016. Evanega, who now leads the Cornell Alliance for Science, said she was so proud to see how each of the winners “has given back as mentors, as thought-leaders in gender in agriculture, as our nations’ top breeders, as mothers, as new faces leading agricultural science.”

During the virtual celebration, Jeannie Borlaug Laube, chair of the BGRI and for whom the awards are named, described her father Norman E. Borlaug as “tenacious in his focus, bold in his ambition and tireless in his pursuit.” Her father’s mission was to deploy the tools of agriculture science to create a world free of hunger and poverty, according to Laube. His efforts launched the Green Revolution and earned him the Nobel Peace Prize in 1970. He died in 2009 after spending his career mentoring young scientists and fighting to end hunger.

“My father would be very proud of you all,” she told the awardees. “If he were here, he would tell each of you that you are the future ‘hunger fighters’ who will be called upon to come up with solutions for global hunger and global food security.”

The BGRI is the secretariat for DGGW, an international initiative to improve wheat. DGGW is funded by the Bill & Melinda Gates Foundation and UK aid from the UK government.

New soil models may ease atmospheric CO2, climate change
In an article published July 27 in Nature Geoscience, Cornell’s Johannes Lehmann and others wrote that scientists should develop new models that more accurately reflect the carbon-storage processes beneath our feet, in order to effectively draw...
END_OF_DOCUMENT_TOKEN_TO_BE_REPLACED