For the Indigenous Cayuga Nation, who call themselves Gayogo̱hó꞉nǫʼ (pronounced Guy-yo-KO-no), Cornell will use the word Ganędagǫ: (pronounced Gah-NEN-dah-go) – meaning “hill” in the Gayogo̱ hó꞉nǫ' language. This is the ancestral name for the land upon which Cornell is built and the naming was supported by the Cayuga Nation’s current leadership. 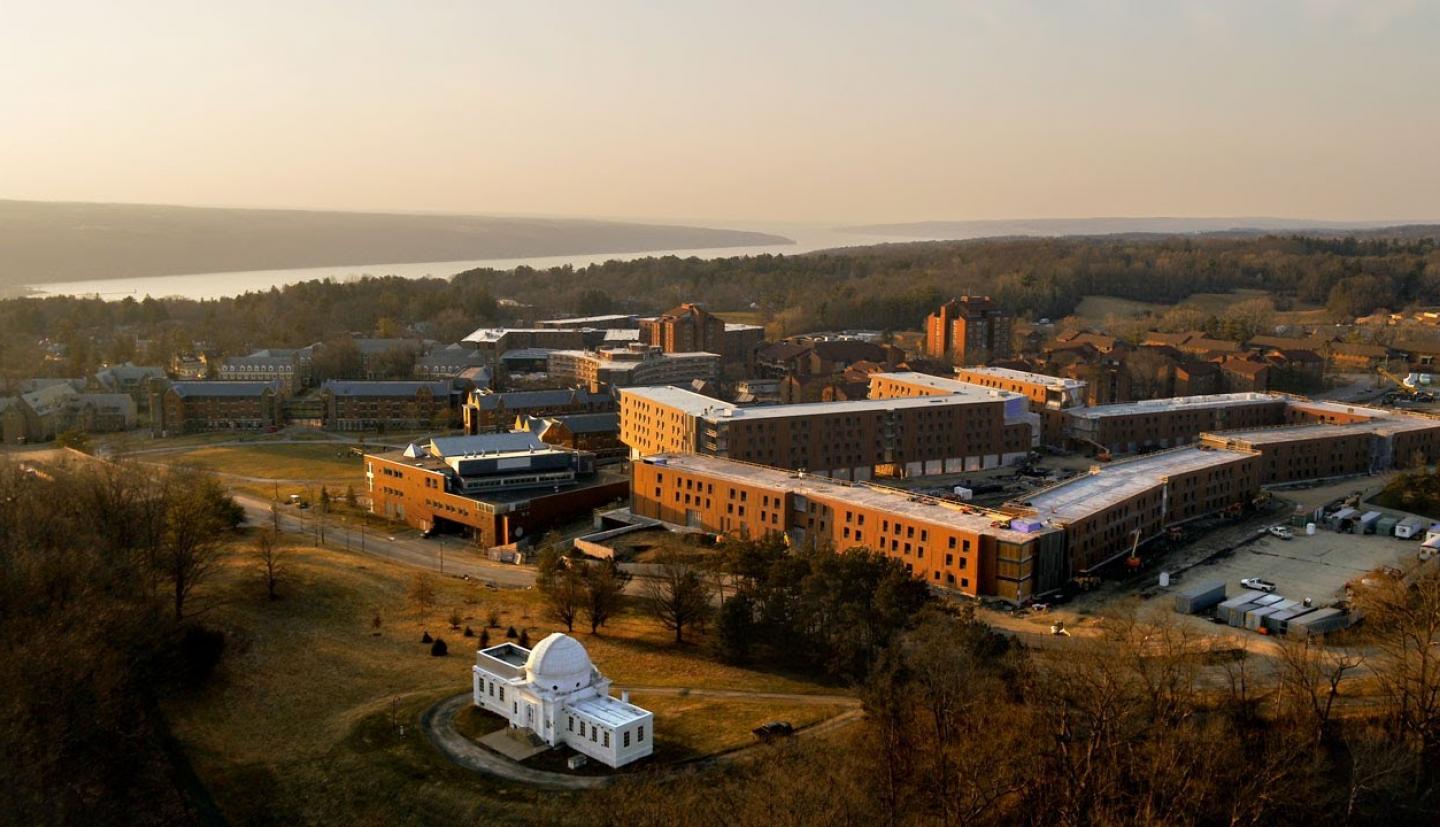 “Cornell was founded on the guiding principle of any person, any study and the Cornell alumni for whom these buildings are named – along with their individual experiences – are a direct reflection of this founding idea,” said Ryan Lombardi, vice president for student and campus life.

“The naming of Ganędagǫ: Hall in the North Campus Residential Expansion brings an important light to the history of our region and to the diversity of Cornell and our surrounding community,” he said.

The North Campus Residential Expansion is a tremendous addition to the campus experience and will play a significant role in shaping the future of Cornell housing for the first two years, beginning with next year’s first-year students, Lombardi said.

“Attaching these inspiring stories to spaces to where Cornell students spend their most formative years ties them to the university’s rich past from day one,” he said. “And it will remind them of the possibilities ahead as they become our future leaders.”

The committee sought the names of alumni whose groundbreaking careers and global impact could energize Cornell students and articulate Cornell’s diversity. “We hope the future residents of these buildings,” Earle said, “will be inspired by the stories behind the names.”

Muhun Kang ‘21, the president of the Residential Student Congress and a committee member, said his group was charged with finding names that reconcile the ideas of Cornell’s founders to today’s values. “We thought about as Cornell’s founding commitment to any person,” Kang said, “and we wanted to choose names that reflected that inclusive philosophy.”

McClintock (1902-1992) arrived at Cornell as an undergraduate in fall 1919 from Erasmus Hall High School in Flatbush, Brooklyn, eager to study science.

A pioneering geneticist, she published the first genetic map of maize in summer 1931 in the journal Proceedings of the National Academy of Sciences. A half-century later, in 1983, she became the first woman in history to win an unshared Nobel Prize in Physiology or Medicine for her discovery of “mobile genetic elements,” known as genetic transposition – or, as she called them, “jumping genes.”

McClintock studied corn’s hereditary characteristics by examining the different color kernels, observing how characteristics are passed down through generations and how genetic elements can sometimes change position on a chromosome.

For this recognition, Cornell’s Faculty Senate passed Resolution 156 on Nov. 18, 2020, in her honor.

“Barbara McClintock took genetics to a new level,” said Susan R. McCouch, a Barbara McClintock Professor of Plant Breeding and Genetics. “She never doubted her observations and she created a new way to understand them. It defied the norms of the time, as other scientists did not take her seriously.”

Hu Shih (1891-1962) revolutionized the Chinese language and is widely considered one of Cornell’s most notable Chinese alumni.

Hu was a leader of the New Culture (favoring democracy) and the anti-imperialist May Fourth movements in China during the early 20th century. While at Cornell, he led the campaign to replace classical Chinese literary language – a difficult language to master – with a new, easier living language that made literature and learning more accessible to large numbers of the Chinese. It positioned China to play a more prominent role on the world stage, according to former Cornell President Hunter R. Rawlings III, in a 2006 Cornell Chronicle article.

As a sophomore, Hu led an effort to donate more than 300 Chinese books to Cornell University Library, laying the foundation for what would become one of the best collections of East Asia materials in the U.S.

Hu also served as Chinese Ambassador to the U.S., chancellor of Peking University and president of Academia Sinica (Chinese Academy).

He is honored on campus through the Hu Shih Professorship and Hu Shih Distinguished Lecture.

Hu’s political philosophy was characterized by support for freedom, individual rights and democracy, according to the naming committee. This will be the first individual building named for a person of Asian descent or for an international student. (The Martin Y. Tang ’70 Welcome Center name is also identified with the Noyes Lodge building).

Cornell's Ithaca campus is located on the traditional homeland of the Cayuga Nation (Gayogo̱ hó꞉nǫ'), members of the Haudenosaunee Confederacy, an alliance of six sovereign nations that have an historic and contemporary presence on this land predating Cornell's presence, according to the committee.

The university was also the beneficiary of Indigenous dispossession, through the land scrip given to Cornell by way of the Morrill Land Grant Act of 1862 – as well as the Ithaca campus land itself.

“Naming the residence hall Ganędagǫ: shows that Cornell recognizes the ongoing ties of Indigenous people to this territory,” said Kurt Jordan ’88, director of the American Indian and Indigenous Studies Program (AIISP) in the College of Agriculture and Life Sciences. Jordan is also an associate professor of anthropology in the College of Arts and Sciences.

“It counters so much of American history that has erased the presence of Indigenous people,” Jordan said. “It’s a positive way to resurface that Indigenous connection that’s been here for thousands of years.”

Cornell has had a long relationship with Haudenosaunee communities, through the Indian Extension Program from 1920 to 1961, and with the American Indian and Indigenous Studies Program since 1983, according to the committee.

For more information, to view renderings of interior spaces or to sign up for the monthly project e-newsletter, visit ncre.cornell.edu.

Meet Jack Elstner '21: Advancing research in oceanography and climate change
These experiences had a lasting impact on him — imparting both the beauty and value of marine ecosystems and the ways in which these resources are exploited. “Even from a young age, I saw how we currently live in a world undergoing massive...
END_OF_DOCUMENT_TOKEN_TO_BE_REPLACED