|
By Krishna Ramanujan
Share
The maple program’s new product development fast-tracks novel maple products to markets by researching new ideas and solving technical challenges, with the help of cross-campus collaborators. And that’s important, as New York boasts more maple trees than any other state, but utilizes less than 1% of potential taps.

On Feb. 15, the weather in Lodi, New York, hovered in the low 20s and it snowed, but that didn’t stop chocolatier Claire Benjamin from setting up a table to greet customers outside her store. Benjamin owns Rue Claire Lavender Farm and Artisan Chocolates, which she runs from a shop her husband built next to their home.

As she had the two previous days, she waited for customers, some of whom had travelled from as far as Rochester and Syracuse, to pick up the Valentine’s Day chocolates they’d ordered online. Between orders, she took refuge from the frigid weather in her car with the engine running.

When her customers arrived, Benjamin served them a crafted blend of hot chocolate and maple sugar, and she chatted with them before they retreated from the cold with their boutique bags.

Benjamin was recently hired as a contractor by the Cornell Maple Program, administered by the College of Agriculture and Life Sciences (CALS), to develop recipes for making maple chocolate at a commercial scale. Her efforts fit into a much larger mission from the Cornell Maple Program to develop new maple products to grow the $30 million maple industry in New York state and boost rural economies. 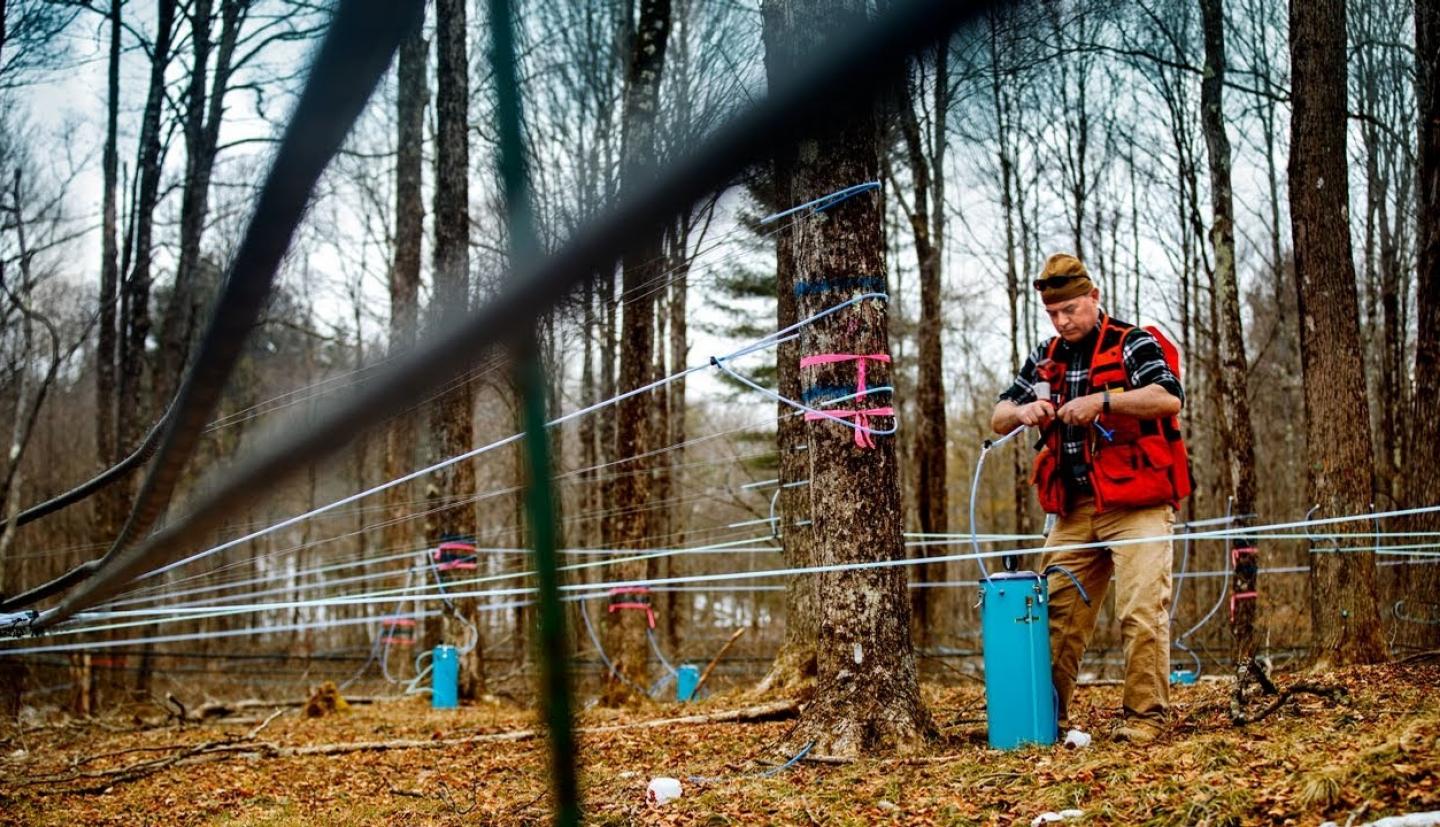 One wing of the program provides entrepreneurs with Cornell maple and food science expertise to develop a wide variety of new products that feature maple as a significant ingredient, which creates new revenue streams and expands market growth.

“Our mission broadly is to support the sustainable growth of maple syrup production,” said Aaron Wightman ’97, co-director of the Cornell Maple Program, who oversees operations at the Arnot Research Forest, a Cornell-owned forest south of Ithaca. The other co-director, Adam Wild, manages the Uihlein Maple Research Forest in Lake Placid, New York, which allows for maple research in a more northerly climate. CALS' Department of Natural Resources oversees both forests.

The program’s mission is accomplished through research and education. Research explores sugarbush management and sap collection systems, processing quality and efficiency, and new product development. All of the new product information is then disseminated to the public, as part of Cornell’s land grant mission, through workshops, conferences, industry newsletters, publications, webinars, notebooks, recipes and direct networking to businesses and maple producers, to name a few.

The Cornell Maple Program produces an average of 4,500 gallons of syrup per year, which is sold through Cornell outlets. Some of the proceeds fund research, as does support from the U.S. Department of Agriculture’s Acer Access and Development Program and the Renewable Resources Extension Act Capacity Grant; New York State Department of Agriculture and Markets; an endowment; and a mix of other smaller grants.

And that’s important, as New York boasts more maple trees than any other state, but utilizes less than 1% of potential taps. State producers have quadrupled maple production since 2005 to 800,000 gallons of syrup last year. That increase created the potential for a $100 million dollar industry, Wightman estimates, as long as farmers can expand their markets by selling in new regions, breaking into the market shares of other industries such as cane sugar and corn syrup, and through value-added products.

“There’s some urgency in the new product development realm,” Wightman said, due to the potential for a glut in the market for syrup.

“With maple, like all agriculture,” Wightman added, “farmers make their profits on the margins, and if we start driving those margins down, it’s not going to be profitable to make syrup anymore.”

New maple products can insulate farmers from the risk of price suppression while also tapping into a food industry trend toward using simple, local, sustainable and natural ingredients – all standards that maple products meet. They also increase the potential for profits: Grade A table syrup averaged $31 per gallon wholesale in 2019, compared with $115 for an equivalent amount of granulated maple sugar, $172 for maple cream, and $240 for maple candy. The booming craft beer market across the state and the country offers enormous potential for selling syrup for use in maple beer, for example.

Family-owned Roxbury Mountain Maple in Hobart, New York, which processes up to 10,000 gallons of syrup in a good year, has been expanding its product line to include traditional items such as maple cotton candy, candies, popcorn and sugar, and now, with Cornell’s guidance, three varieties of maple soda.

“The bulk market for syrup can get very competitive and become saturated, especially after a good season,” said Becca Holscher, general manager at Roxbury Mountain Maple. In order to keep up demand, Holscher has explored new markets in the U.S. and Puerto Rico and abroad, including Japan.

“There’s a lot of syrup out there, but if you look a little farther, like turn it into soda, or sell it internationally, there is a huge untapped market.”

At the Arnot Forest facility, one of technician Ailis Clyne’s main tasks is to explore novel ways to use maple. Starting with a literature review, Clyne ’17 and Wightman will flesh out ideas, and Clyne will do pilot trials in a test kitchen, where she tinkers to create a workable formula and recipe. Her experiments with kombucha required her to try various syrup flavors to see if any compounds interfered chemically with the fermentation process. She also began experiments with maple chocolate and hot chocolate; the program has now hired Benjamin to take these tests to the next level. With the chocolates, she had to develop stronger-flavored sugars, since competing flavors of cacao masked the maple.

“We make sure we have a recipe that works and tastes good that we can share with people, or at least good enough that maybe they can say, ‘I can make that better,’” Clyne said. Recipes are also approved as food safe by the Geneva, New York-based Cornell Food Venture Center, which informs and advises small food manufacturers about food-safety standards and regulations and provides tools, techniques and solutions for meeting those codes.

Some new product ideas are also analyzed in the Capstone Program, where senior students in food science provide detailed reports on everything from food safety, business plans, marketing, nutritional values, packaging, product stability and solving unique problems in new products. Reports, along with recipes, articles and production guidelines, are made available online for such products as maple-infused beer, wine, sports gel, sodas and kombucha.

The maple program will also hire experts, such as Benjamin, in order to improve recipes. Making a good maple chocolate infused with both flavors requires finesse and knowledge. While other maple chocolates exist, Benjamin intends to improve on the flavor profiles and scale up a bean to bar recipe for chocolatiers.

While there are maple producers and big businesses interested in scaling up products, such as with sodas, sap and maple water, the program also aims to share methods with people who tap maple as a hobby and make up the lion’s share of maple producers.

Seniors in the Capstone Project in Food Science work on recipes in the Stocking Hall test kitchen that will be shared with industry partners. Photo by Jason Koski/Cornell University

From idea to shelf

When Becca Holscher was still in high school she attended a ‘Maple Syrup 101’ workshop in her area of the Catskills mountains, which was taught by former Cornell Maple Program director Steve Childs. The workshop opened the door for her parents, Dave and Linda Holscher, to start their business in 2011.

“Right from the beginning, we knew the Cornell crowd, because they were the people who introduced us to maple syrup as a business rather than a hobby,” Becca Holscher said.

The maple program, in collaboration with the Capstone program and the Food Venture Center, provided a food-safe recipe. When Roxbury Mountain Maple reached out to family friends in Rhode Island who own a bottling and beverage company, they had to tweak the recipe to scale it up. In New York, sodas have to be a certain pH to be shelf stable, so Cornell helped them adjust the recipe, and with clearing regulatory hurdles. Now, Roxbury sells out their maple cream, maple lemon ginger beer, and maple orange crush sodas in the summers, mostly at farmer’s markets in New York City.

“If we did want to push it more, it would do very well,” Holscher said. “People like the flavor and that it has no artificial sweeteners in it.”

“There are endless possibilities,” Wightman said. “I think we’re at the very tip of the iceberg of where maple sap could end up in value-added products.”

What bird is singing? Merlin Bird ID app offers instant answers
The free app from Cornell Lab of Ornithology identifies the sounds of more than 400 species from the U.S. and Canada, even when multiple birds are singing at the same time.