|
By David Nutt
Share
DNA has a lot of handy uses. It stores the blueprint of genetic code. It helps usher along the evolution of species.

It could also potentially make a stronger, more sustainable spoon, among other things.

A Cornell-led collaboration is turning DNA from organic matter – such as onions, fish and algae – into biodegradable gels and plastics. The resulting materials could be used to create everyday plastic objects, unusually strong adhesives, multifunctional composites and more effective methods for drug delivery, without harming the environment the way petrochemical-based materials do. 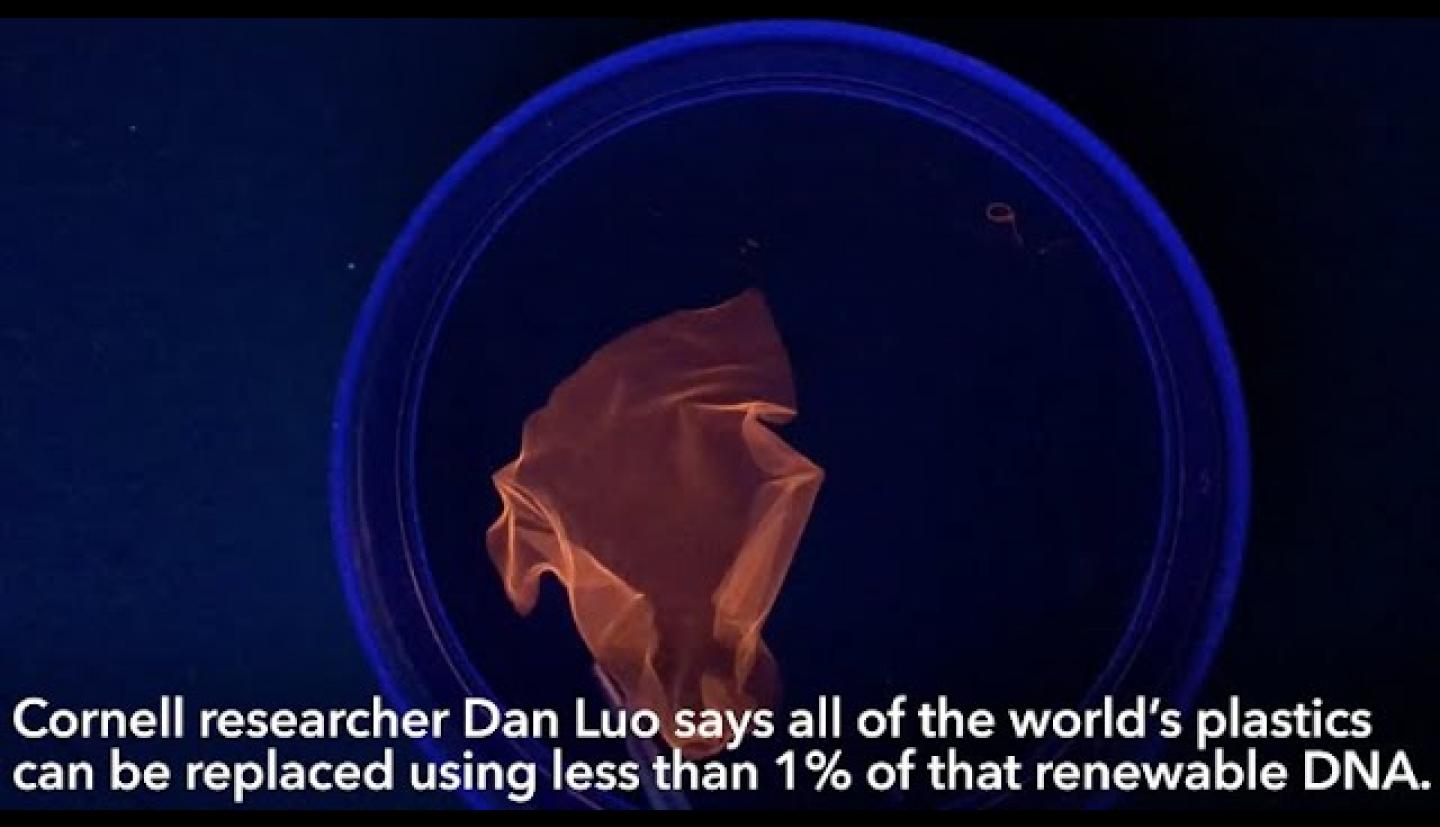 The team’s paper, “Transformation of Biomass DNA Into Biodegradable Materials From Gels to Plastics for Reducing Petrochemical Consumption,” published May 11 in the Journal of the American Chemical Society.

The collaboration is led by Dan Luo, professor of biological and environmental engineering in the College of Agriculture and Life Sciences. Luo’s group has been exploring ways to use biomass DNA as a genetic as well as generic material, capitalizing on its properties as a novel polymer.

“There are many, many reasons why DNA is so good as a generic material,” Luo said. “DNA is programmable. It has more than 4,000 nanotools – those are enzymes – that can be used to manipulate the DNA. And DNA is biocompatible. You eat DNA all the time. It is nontoxic and degradable. Essentially you can compost it.”

Perhaps biomass DNA’s greatest virtue is its sheer abundance. There are an estimated 50 billion metric tons of biomass on Earth, and less than 1% of that amount could fulfill the world’s need for plastics for a year, according to Luo’s team. Meanwhile, petrochemical-based products take a tremendous toll on the environment – from oil and gas exploration and refining, to the industrial synthesis of plastic, to the millions of tons of products that litter the land and oceans without degrading.

While biomass has previously been converted into biodegradable materials, that process – in which polysaccharides such as cellulose are broken down and resynthesized into polymers – requires extra energy and extreme temperatures that also strain the environment.

Luo’s team bypassed that breakdown-synthesis process by developing a one-step cross-linking method that maintains DNA’s function as a polymer without breaking its chemical bonds. The process is surprisingly simple: The researchers extract the DNA from any organic source – such as bacteria, algae, salmon or apple pomace – and dissolve it in water. After the pH of the solution is adjusted with alkali, the researchers add polyethylene glycol diacrylate, which chemically links with the DNA polymer and forms a hydrogel.

The gel can then be dehydrated to produce a range of denser materials, like plastic and glue.

“It’s a much simpler process than conventional synthesis,” Luo said. “The whole process is more doable, more economical and [can be done] at greater scale, because you don’t have to pretreat the biomass DNA. You just directly cross-link them into plastics.”

An additional perk of cross-linking is that researchers can tweak the new materials with unusual properties. For example, postdoctoral researcher Dong Wang created a glue that can stick to Teflon at minus 20 degrees Celsius, a temperature that would freeze traditional water-based adhesives. Wang also made a biomass “flower” that incorporated magnetic nanoparticles and could be manipulated with a magnetic field.

“The product’s application depends on the properties we afford to it,” Luo said. “You can make it luminescent, make it conducting or non-conducting, make it much stronger. Anything you can think of.”

In addition to generating everything from toys and utensils to clothing and skin for buildings, Luo said hydrogels could be particularly well-suited for controlled-release drugs. The researchers also were able to achieve cell-free protein production that had not been possible in petrochemical-based products.

“Our cross-link method is very general,” said Wang, the paper’s lead author. “It can be expanded to other polymers, other molecules.”

The cost of conversion at the present lab setting is about $1 per gram of material, with almost 90% of the expense going to the ethanol required to extract the DNA from the biomass. If manufactured on an industrial scale, Luo estimates the cost would be reduced dramatically, by a hundredfold or even a thousandfold.

One potential challenge is obtaining large enough amounts of biomass to extract the DNA. The researchers still need to figure out how to control the lifespan of the materials and the time it takes for them to degrade.

“We are also working to make the biomass DNA materials much more functional, to make different types of materials, making them super strong, super soft,” Luo said. “But we will never forget it’s a DNA-based material. Whenever possible, we want to take advantage of DNA’s genetic role.”