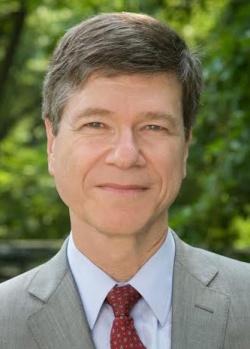 Renowned economist Jeffrey Sachs, who serves as a special adviser to United Nations Secretary-General António Guterres on sustainable development goals, will present a lecture, “Reclaiming America’s Democracy,” on Sept. 12 at 7 p.m. in Statler Auditorium, Statler Hall. The event is free and open to the public.

The lecture will focus on the importance of civic engagement in the American context and its implications for sustainable global development.

Before the Sachs lecture, there will be voter registration organized by the bipartisan Vote Everywhere coalition and Cornell student organizations. The Vote Everywhere group is a program offered by the Andrew Goodman Foundation, named for Goodman – who along with James Earl Chaney and Cornellian Michael Schwerner ’61 – were civil rights workers killed by members of the Ku Klux Klan in 1964 for registering voters in Mississippi.

Goodman, Chaney and Schwerner are memorialized in stained glass at Cornell’s Sage Chapel.

Sachs is University Professor at Columbia University and directs Columbia’s Center for Sustainable Development. Sachs previously advised U.N. Secretary-General Kofi Annan and has twice been named to Time magazine’s 100 most influential world leaders. He presented Cornell’s Jill and Ken Iscol Distinguished Environmental Lecture in 2006, with the topic: “The End of Poverty: Economic Possibilities for Our Time.”

The lecture is co-sponsored by the Polson Institute for Global Development, the Mario Einaudi Center for International Studies, Cornell Africana Studies and Research Center, the Department of Government, and the Atkinson Center for a Sustainable Future.

Jinhua Zhao named new dean of Dyson School
Zhao, who spent eight years as director of Michigan State’s Environmental Science and Policy Program, will begin his appointment at Cornell on July 1. “Jinhua is a top-notch scholar, has an excellent track record as an administrator, and...