Soil, it turns out, can be a work of art – as a team of Cornell artists and scientists have proven. A painting created with soil won first prize in the university category of a global soil painting competition sponsored by the Food and Agriculture Organization of the United Nations (FAO).

Kirsten Kurtz, manager of the Cornell Soil Health Lab and a graduate student in the field of natural resources, organized the public painting event Dec. 5, 2017, in the lobby of Mann Library in honor of World Soil Day. There, members of the Cornell community created two large canvases from more than 50 paints formulated from soils from around the world.

“It’s amazing the range of colors you can get from soil,” said Kurtz, who started using the technique four years ago. “Of course you have the usual browns and tans, and some tinged with yellow and red. But some yield pigments from jet black to light gray and even, rarely, green.” 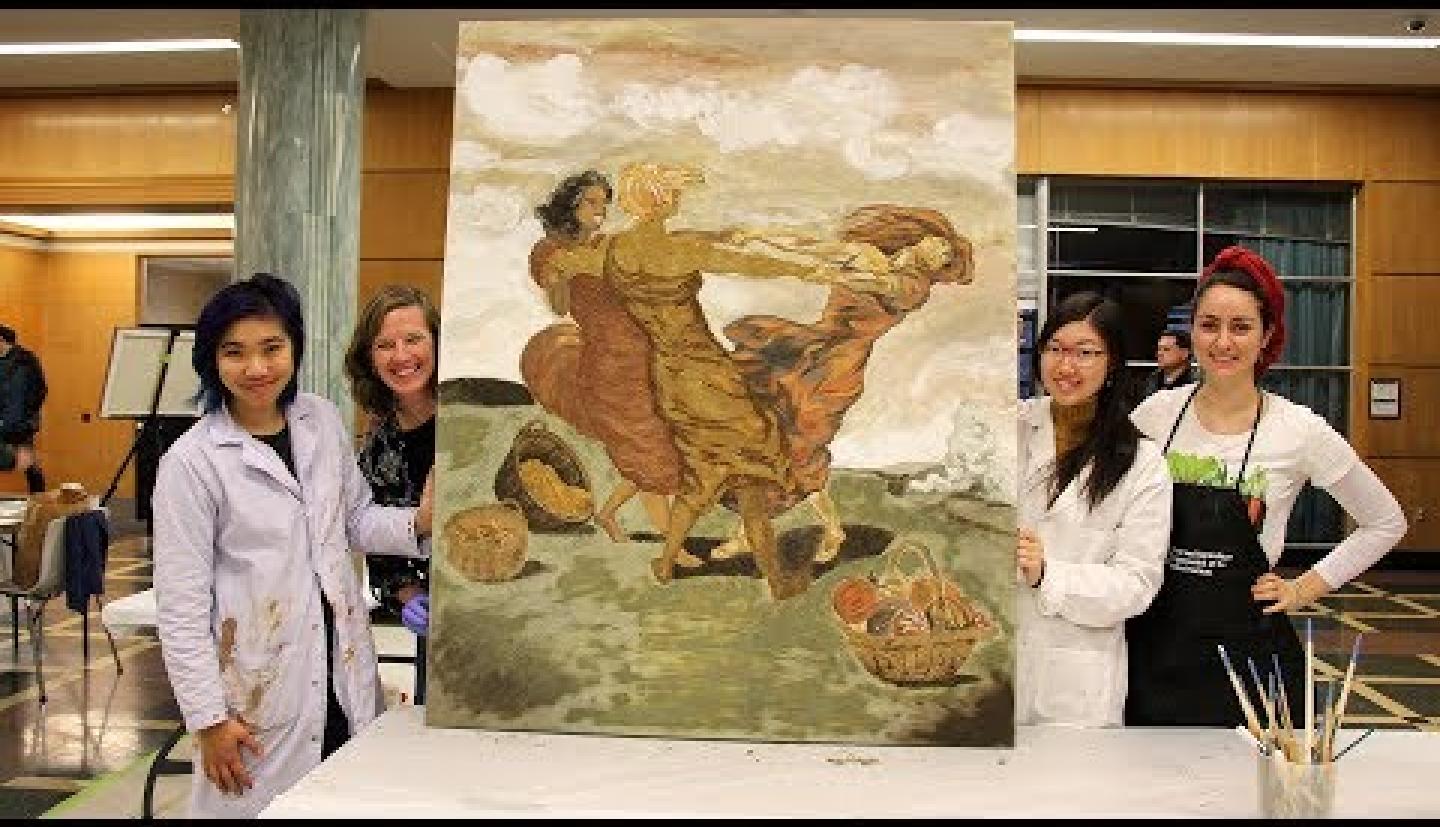 Soils found around the world come in a range of textures as well, from gritty sand to smoother clay, Kurtz said. “The green on our winning painting is derived from French clay. Green soil is very difficult to find. The green French clays we used are generally found deep below the surface and developed over time from the ashes of ancient volcanoes.”

To create the substance used for painting, Kurtz pulverizes dried soil and mixes it with water and gesso as a binder. Kurtz led a similar community painting event at Cornell in 2015 that inspired FAO to take the idea worldwide.

On the main canvas, Kurtz and artists affiliated with the School of Integrative Plant Science used soil paints to honor an agricultural practice used by Native American communities. The scene they painted was based on “Ringelreihen,” a 1910 work by the German artist Franz von Stuck, which shows three women spinning arm-in-arm.

“We added three baskets filled with corn, beans and squash. These are the crops in the traditional ‘Three Sisters’ polyculture used by the Haudenosaunee communities here in the Finger Lakes for centuries, a technique that is a model of sustainable farming,” Kurtz said.

Other members of the Cornell community tried their hand at soil painting on the second canvas, completing a mosaic-like design. Plans are to hang the work in the entrance of Bradfield Hall.

“My main goal for these events is to inspire people to think about soil,” Kurtz said. “It is as an essential natural resource, as important as clean water and air. We depend on healthy soil to provide us with food and fiber, and we can use soil to help fight climate change. We’ve got lots of great reasons to celebrate soil.”

Craig Cramer is a communications specialist for the School of Integrative Plant Science.

Sontag Foundation grants $1.2M for brain cancer research
The awardees are Marcos Simoes-Costa, assistant professor of molecular biology and genetics in the College of Agriculture and Life Sciences, and Dr. Dan A. Landau, associate professor of medicine and a member of the Sandra and Edward Meyer...