The 2030 Project to marshal faculty to solve climate crisis

|
By Blaine Friedlander
Share
Declaring this the “decisive decade” for climate action, Cornell launched The 2030 Project: A Climate Initiative, which will mobilize world-class faculty to develop and accelerate tangible solutions to the climate challenge.

From transforming food and energy systems and reducing greenhouse emissions to advancing environmental justice and shaping policy, Cornell will use practical science to help save the planet before it’s too late.

The 2030 Project, which will marshal the expertise of hundreds of faculty members, debuted May 11 at the Cornell Future Forum in San Francisco – the first in-person event in California since the start of the pandemic.

“We really are an institution like no other,” said President Martha E. Pollack, addressing alumni and friends at the event. “We combine Ivy League scholarship with that land-grant mission. We combine the liberal arts with professions, our rural identity with our urban campuses; we have an incredible depth and breadth of world-leading expertise and a culture of collaboration. And of course, we have a foundational commitment to diversity, equity, inclusion and belonging. And I think that this constellation of strengths has really enabled us to be uniquely agile in our response to the changes and challenges of our times.”

The 2030 project seeks to solve the climate crisis through faculty’s existing interdisciplinary collaborations, dissolving academic silos and fostering unlikely partnerships to tackle one of the gravest challenges humanity has ever faced. 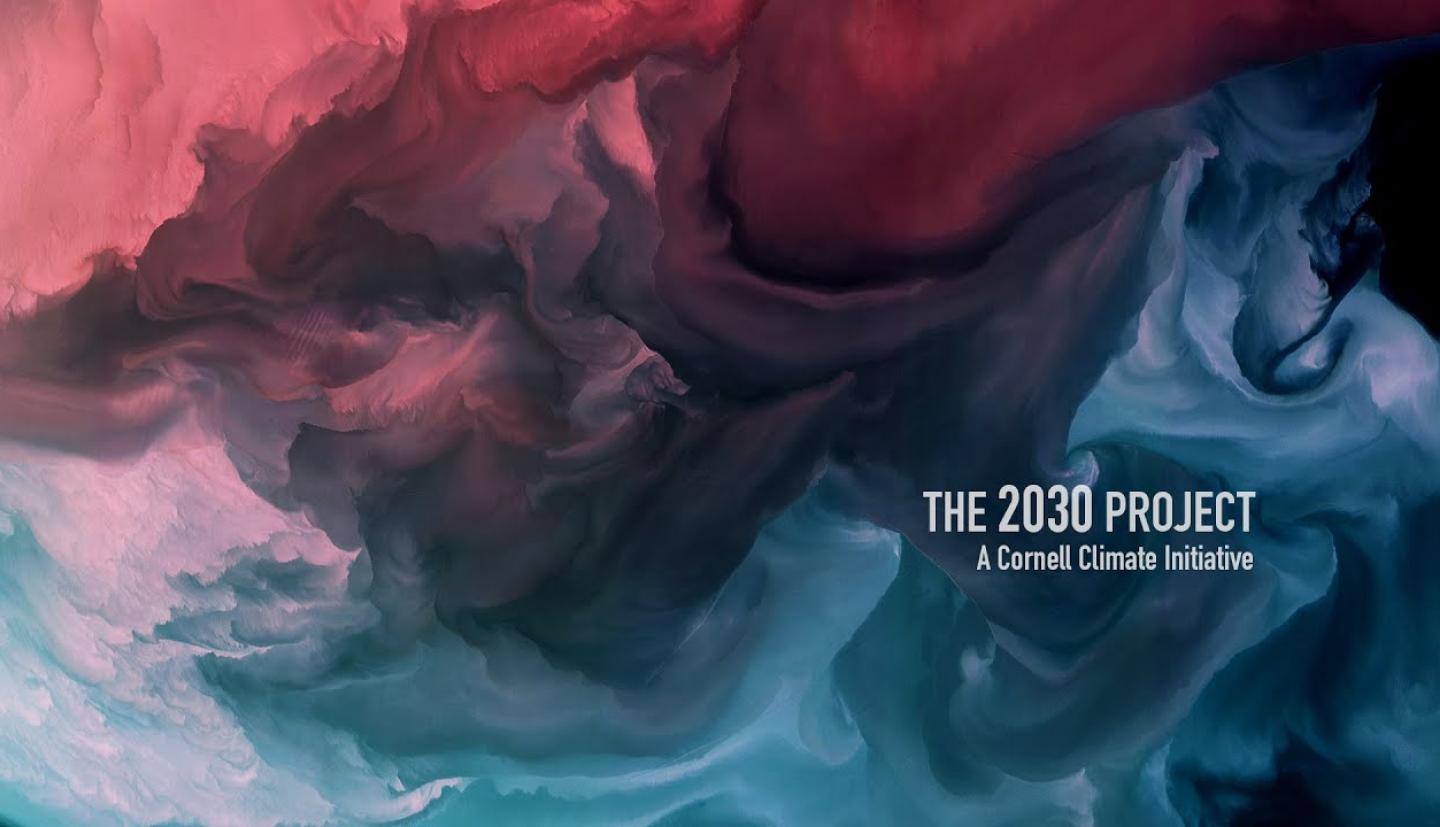 “We know that the climate is changing,” said Benjamin Z. Houlton, the Ronald P. Lynch Dean of the College of Agriculture and Life Sciences, who will serve as the co-chair of the new initiative. “It’s bad and it’s getting worse. We know why it’s happening. We can solve it. All those things are true at the same time."

“Climate is not some partisan future, some threat that’s lurking behind the scenes,” Houlton said. “It’s trying to figure out – in places like California, where many of you have experienced drought, heat waves, wildfires and continuing whiplash events – how to solve atmospheric change.”

Houlton said the world needs a systemic, comprehensive, holistic set of scalable solutions that must be equitable and inclusive. There is a brief, rapidly closing window, he said, to solve what the United Nations’ Intergovernmental Panel on Climate Change calls a “code red” climate scenario.

Co-chairing the project with Houlton is David Lodge, the Frank S. DiSalvo Director of the Cornell Atkinson Center for Sustainability, who said the project will embrace all of Cornell’s expertise to move research, insight and discovery into large-scale impact and solutions.

Project leadership also includes Lynden Archer, the Joseph Silbert Dean of Engineering, and Ray Jayawardhana, the Harold Tanner Dean of the College of Arts and Sciences. It will be managed by Ben Furnas ’06, the project’s executive director.

“This project is a manifestation of Cornell’s nimble, open enthusiasm to attract researchers and faculty and students all across the university to take action on climate,” Furnas said recently. “As an ambition, the 2030 Project will mobilize Cornell and connect to our community and the state and then scale our research to the world – which is certainly part of Cornell’s DNA as a land-grant institution.”

“We have the objective of making sure that every green electron that we generate actually gets used,” said Lindsay Anderson, associate professor of biological and environmental engineering (CALS), and the interim director of the Cornell Energy Systems Institute, speaking at the 2030 Project panel at the event. “Our energy – particularly our electric power system – is a huge contributor to greenhouse gas emissions. If we can decarbonize our energy system, we will have a big impact on climate change.”

This 2030 Project brings together Cornell’s in-house strengths, she said.

“If we’re going to tackle these large problems at the forefront, then we’re all going to need to work together. And not only my industry, but this collaborative culture that [Cornell has] is a unique opportunity,” said Anderson, who is also the Norman R. Scott Sesquicentennial Faculty Fellow and the Kathy Dwyer Marble and Curt Marble Faculty Director for Energy at Cornell Atkinson.

Greeshma Gadikota, assistant professor and Croll Sesquicentennial Fellow in the School of Civil and Environmental Engineering, where she directs the Sustainable Energy and Resource Recovery Group, spoke about using Earth Source Heat – a project now in the testing phase – as a way to keep campus warm in the winter, instead of using carbon-based methods.

Geoff Coates, Tisch University Professor in the Department of Chemistry and Chemical Biology (A&S), discussed plastics and finding new, advanced materials as a key to decarbonization.

Coates said that about 100 pounds of plastic, created from natural gas, is made annually for every person on Earth.

“We’re adding carbon dioxide into the atmosphere to make plastics and that’s unsustainable,” he said. “As we start to decarbonize transportation, energy, chemicals – especially plastics – that’s next on our list. We’re going to have to fix that.

“We’re not just polluting the atmosphere,” Coates said. “We’re polluting the Earth, the soil, water. About 40% of our plastics get landfilled.”

Coates’ lab is working on putting carbon dioxide into the plastic, rather than releasing it into the atmosphere.

“We’re trying to flip the script,” he said. “The chemical industry unfortunately has a 60-year start on us, but I’m trying to completely change the way we make plastics.”

Computational sustainability, Gomes said, may be the foundation for helping other scientific fields achieve environmental action. Flecker discussed how artificial intelligence enabled strategic hydropower planning across the Amazon basin; and Fink demonstrated how AI adjusts for gaps in citizen science data and how it can promote sustainability.

“This is the decisive decade. We used to think that we could just cut emissions or capture carbon. We are past the point of thinking in terms of either/or cases,” Houlton said. “We need to think about silver buckshot, not silver bullets.”

This story originally published in the Cornell Chronicle.

Policy, farm management help China mitigate climate change
Production of animal protein in China has increased by 800% over the past 40 years, but new research shows why the amount of climate-warming nitrous oxide released from this animal farming has not risen as quickly.
END_OF_DOCUMENT_TOKEN_TO_BE_REPLACED